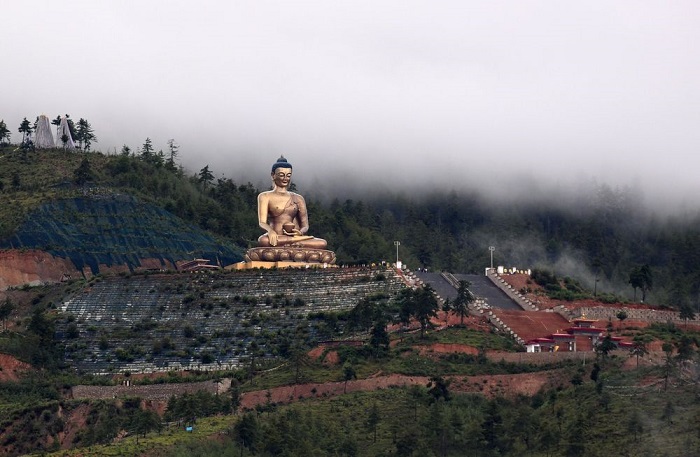 What does a 21st-century land grab look like? China is giving the world a good illustration in Bhutan. In quietly seizing a chunk of land from its small Himalayan neighbor, Beijing is displaying the favored tactic of countries that want to alter the international order but aren’t ready to confront it head-on.

The land grab in question was revealed by researchers last week in Foreign Policy magazine. Over several years, China has sought to fortify its Tibetan border — and gain leverage on South Asian rival India — by stealthily constructing a complex of roads, villages and security installations on land that belongs to Bhutan.

It’s unclear whether the Bhutanese government realized that the People’s Liberation Army had effectively invaded a small, remote part of its territory, or if it knew but was powerless to respond. What is clear is that the Chinese presence isn’t going anywhere. Beijing has executed a fait accompli by creating facts on the ground.

It’s an increasingly familiar maneuver: This is the nature of territorial aggression in the modern world.

It wasn’t always this way. Before 1945, it was more common to see the outright, blatant conquest of entire nations. Just think of how many times Poland was wiped off the map by stronger powers. Since World War II, however, only a single internationally recognized country — South Vietnam — has disappeared because of military aggression. When North Korea tried to conquer South Korea, or Saddam Hussein’s Iraq temporarily swallowed Kuwait, the international community led by Washington restored the status quo.

Some scholars argue that a revolution in international law made the world safer for the weak. In nominally outlawing war, they contend, the Kellogg-Briand Pact of 1928 turned the moral tide against aggression. In truth, the key was the post-World War II Pax Americana, rooted in military alliances and forward deployments that delivered unprecedented security to key regions of the globe. To allow unchecked military aggression, President Harry Truman explained to Congress in 1947, was to cast the world back into the dark anarchy that had just produced a cataclysm.

The result, though, was not to eliminate aggression. It was simply to moderate it through the force of American power. Revisionist nations find it more difficult to openly confront a U.S.-backed status quo, so they have to proceed more subtly. As research by Dan Altman of Georgia State University shows, the answer since 1945 has been the limited land grab, in which an aggressor quickly or covertly seizes what is often a fairly modest piece of terrain.

China has adopted a piecemeal, step-by-step approach to controlling the South China Sea, making moves — building an artificial island here, seizing a disputed reef there — that shift the status quo without triggering a major conflict with its neighbors or Washington. Beijing quietly sends troops onto pieces of inaccessible terrain claimed by India or Bhutan. It tests Japan’s control of the disputed Senkaku Islands in the East China Sea by applying consistent, low-grade military pressure with its coast guard.

The Russian playbook has similar elements. Although Moscow has openly used force for purposes of territorial revision, it has worked around the U.S. alliance system by attacking countries — Georgia and Ukraine — that are outside of it. When Moscow seized Crimea from Ukraine in 2014, it did so ambiguously, deploying forces without identifying markings, and quickly, before anyone could respond. Russia reportedly continues to stage slow-motion, low-visibility land grabs against Georgia by moving border posts in the dark of night.

In a way, the fact that aggression now happens mainly in this murky “gray zone” is a testament to what the U.S. and its friends have built since 1945. What Russia has done in Ukraine and Georgia is tragic. China’s sneaky conquest in Bhutan makes a mockery of its pledges that it will never seek hegemony or expansion. But these offenses are not as awful as what the smaller nations of the world once suffered.

Today’s revisionist powers largely respect, even as they resent, the American system of stability and deterrence, so they have confined their expansion to gambits that are unlikely to provoke a major war.
For now, anyway. Gray zone aggression is not simply about the piece or land or sea at issue. It is probing behavior, meant to determine how far an opportunistic power can go. When China received only mild criticism after it seized Scarborough Reef from the Philippines in 2012, and then commenced its island-building campaign in 2013, it accelerated its drive for primacy in the South China Sea. If it gets away with one land grab, why not try another?

And make no mistake: Russia and China do not like being hemmed in by American alliances and military power. That’s why they’ve been developing capabilities that might give them a good shot at defeating the US military in the Baltic region, the Black Sea or the Taiwan Strait.

What keeps the world relatively orderly is not the absence of malign intentions but fear of the consequences that aggressive action will bring. The increase of gray-zone expansion by China and Russia indicates that this fear is slowly ebbing.

Land grabs in Ukraine, the South China Sea or even the Himalayas are troubling in their own right. They are more worrying still for what they reveal about an international order that is fraying at the edges.