Taliban captures a ‘district’ not far away from Kabul 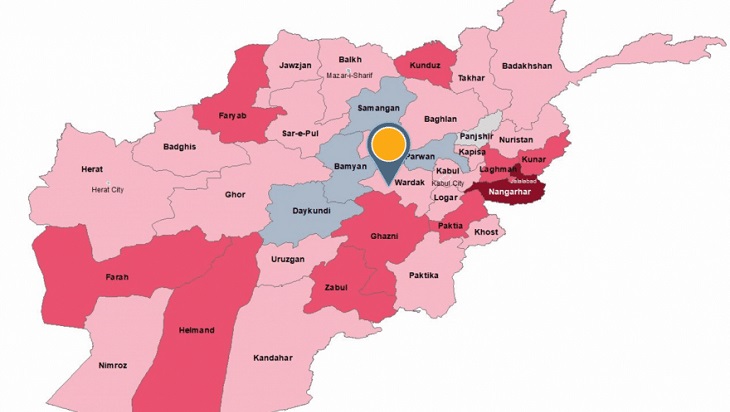 Media outlets in Afghanistan reported that Nirkh district of Maidan Wardak collapsed to the Taliban.

The Ministry of Interior on the other hand says that the Afghan National Defense and Security forces have made a tactical retreat from the region following heavy clashes on Tuesday afternoon.

According to MoI the defense forces retreated after inflicting heavy casualties on the Taliban fighters.

Meanwhile, the Taliban said they had seized the district compound, the district police headquarters, district’s intelligence department, and an army base.

In addition to inflicting heavy casualties to the government forces, many other security force members were captured and all their equipment was seized by the Taliban, a Taliban spokesman told media.

There are no reports of the exact Taliban and government forces’ casualties.

This comes as MoI on Tuesday announced that the Taliban carried out 15 suicide attacks during the month of Ramadan since April 13 the start of the holy month.

According to MoI 255 civilians were killed and more than 500 civilians were wounded in the Taliban attacks only in Ramadan month, and that the militant group was responsible for 200 blasts, but the Taliban denied the allegations of their involvement in civilian deaths and casualties.

Moreover, The death toll from the Kabul school bombing has increased to 85, most of them schoolchildren, girls, and civilians.

This comes as General Sir Nicholas Carter, Chief of General Staff of the United Kingdom in an interview with Tolonews said that the Taliban has no justification for their Jihad in Afghanistan as foreign troops are preparing to pack up and leave.

He said that the Taliban are now fighting afghans which they should avoid immediately.

In a released statement on Tuesday, UK government spokesman said “General Sir Nick Carter and Tom Drew, Foreign, Commonwealth, and Development Office Director-General for Middle East, North Africa, Afghanistan and Pakistan, travelled to Afghanistan at the invitation of President Ghani. As part of the visit, they participated in a bilateral meeting with Pakistani Army Chief of Staff General Qamar Javed Bajwa, which included discussions on the Afghan peace process.

“Sir Nick Carter reaffirmed the UK’s continued commitment to work with both Afghanistan and Pakistan as partners in the fight against terrorism in the region.”

UK embassy in the statement said that “As General Sir Nick Carter confirmed during his visit, the UK, will continue to provide assistance to the ANDSF, including through financial support and through offering training to Afghan soldiers and officers in the UK. We are proud to have served alongside the Afghan National Defence and Security Forces (ANDSF) and to have played a role in developing these professional and capable armed forces, and we look forward to continuing to support them in the future.”

The United Kingdom assured it will continue to support the Afghan Security Forces by training them Afghan soldiers and officers in the UK and provide financial assistance to the Afghan military.