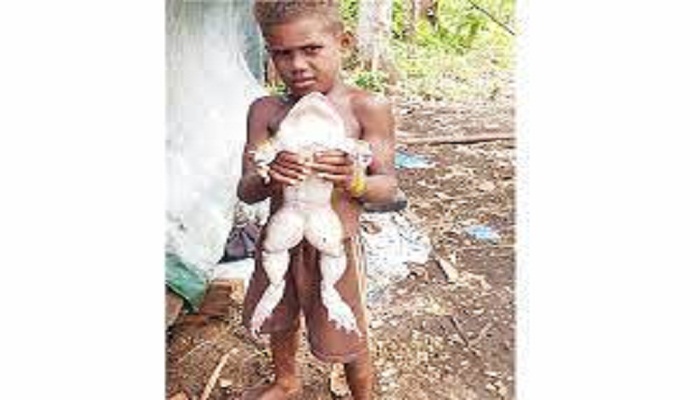 Villagers in the Solomon Islands were left stunned after coming across a giant frog, described as being as big as a human baby. A photo taken by Honiara resident Jimmy Hugo shows a young boy holding the frog up for the camera - and it has created a huge buzz on social media, sparking new interest in a species that is facing a decline in population.

Mr Hugo, the owner of a timber milling operation, said that mill workers came across the frog while hunting for wild pig in April. He then shared a photo of the giant frog - a Cornufer guppyi - on Facebook.

"Where I come from, it's called bush chicken," Mr Hugo wrote while sharing the pic.

The pic has gone viral on Facebook, collecting over 800 'shares' and thousands of reactions. "Amazing," wrote one Facebook user. "That's the largest water frog in Solomon Islands and probably in Melanesia," another remarked.

"At first, I thought only a few people would see it and then suddenly I saw lots and lots of people commenting," Mr Hugo told ABC News. "I was very surprised to see how people reacted to the picture."

In the Solomon Islands and Papua New Guinea, the Cornufer guppyi frog is also known as "bush chicken" or as the giant webbed frog. It is hunted by locals and prized for its meat.

"That's the expression, it's bush chicken and it's more delicious than chicken," Mr Hugo said.

While social media users have been left amazed by the huge frog frog - dropping stunned comments on Mr Hugo's photo - even experts are surprised by its size. "I've never seen one that big. It's quite uncommon for them to get to that size so this one must have been quite old," Jodi Rowley, the curator of amphibian and reptile conservation biology at the Australian Museum, was quoted as saying by the National Geographic.

These frogs are today facing a decline in population due to habitat loss and pollution.