Why Covid-19 is a Man-made Disaster 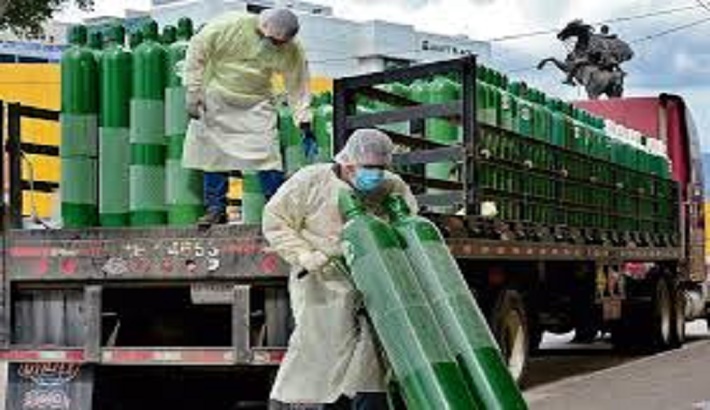 The current situation in India will end some day after wrecking havoc on millions of lives and livelihoods. And questions are and shall rightly be raised: Was it largely a manmade disaster? Could this be avoided or impact lessened?

On May 1, India's coronavirus cases hit a grim global record with 401,993 fresh infections in the last 24 hours with 3,523 deaths reported. The third phase of the world's largest vaccination drive has also started on May 1 amidst chaos as several states flag shortage.

Even die-hard pro-government people also do not believe in these figures. Since the testing is very low, in many states like UP private laboratories are ordered not to conduct tests, and many test reports are not coming even after five days, one never knows the actual number of infections. Journalists and health-workers have noted that infections can be two to three times of what is reported.

The entire deterioration of the scenario has happened rapidly in April, last week being the worst. It is now being reported that the deaths and suffering are more due to lack of ICU beds, oxygen and some critical drugs than the disease itself. And we need to look at the reasons for the same.

The Disaster Management Act, 2005, extends to the whole of India and provides for "the effective management of disasters and for matters connected there with or incidental thereto." The Act calls for the establishment of National Disaster Management Authority (NDMA), with the Prime Minister of India as chairperson. But it has been criticized for marginalizing Non-governmental organizations (NGOs), elected local representatives, local communities and civic groups.

NDMA so far formulated 30 Guidelines on various disasters. The 2019 National Disaster Management Plan deals extensively with Biological Disaster and Health Emergency. This is the broad legal framework within which activities to contain Covid-19 are being carried out by the Union and State governments.

Undoubtedly, India’s large population poses an administrative challenge in dealing with any disasters. However, overall management could have been strengthened through different ways, on which the government has failed.

The entire nation has been reporting lack of oxygen and essential drugs. Several media have graphically shown that failure to act, refusing to act, or acting far too late is behind these crises across the nation.

Many in this second surge are dying more due to the lack of oxygen than due to the virus per se.

Till date, Essential Commodities Act has not been invoked against hoarding or black marketing of essential drugs, oxygen etc.

India’s total healthcare spending is a mere 3.5% of GDP, far lower than many countries. Only a third of India’s health care spending comes from the government. With a poor infrastructure, India’s health system is on the brink of collapse. Hospitals across the country are running out of oxygen supplies, ventilators and beds. There is an urgent need to expand healthcare infra-structure by transforming all stadia, large halls, worship places, educational institutes into temporary Covid care hospitals.

India has started airlifting oxygen generators and other supplies from abroad. The US is sending ventilators, test kits, PPE and oxygen concentrators to Delhi, and has overturned a ban on the export of raw materials India needs to ramp up vaccine production. In the short term, this emergency disaster relief is key to curbing the second wave.

While the country is tackling with the issue of shortage and building capacities, the politics between the centre and the states has spilled into the distribution of vaccines. Various states pushed the Union Health Ministry to supply more vaccine doses for vaccination of everyone above the age of 18 yrs. In response, the centre has asserted its view that the states having the second-wave of the spread of covid19 are politicizing the public health issue and concurrently spreading lies. The centre also accused the states of not carrying out enough tests, contact tracing and ramping up the health infrastructure. The truth is on both the sides, and loser is the common citizen.

Experts say the current crisis could have been avoided if the government had acted earlier. But it did not being steeped in incompetency and complacency.

The RBI in its bulletin of January 21, 2021, said, “Soon the winter of our discontent will be made glorious summer.” The next day, Prime Minister Narendra Modi heralded the spirit of Atmanirbhar Bharat (self-reliant India), claiming that had helped India secure victories in two major battles: on the cricket field against Australia and in the pandemic. India’s leaders ignored warning signs in the data and the news of variants circulating in other countries.

The scale of the current crisis may have been driven by more-transmissible variants, though data are limited. The virus moves quickly through the multigenerational households that account for 4 in 10 Indian homes. Chronic under funding of the health system over decades has also left hospitals ill-equipped to deal with the surge.

India has a history of successful, large-scale immunization programs for diseases like polio and tetanus, first-rate scientists, highly trained doctors and powerful networks of community health workers. What has been lacking, experts say, is the political will to get ahead of the crisis—and to use data and science to its advantage.

In 2020, the hurried national lockdown with 4-hours of notice was seriously flawed. The short window brought trains, buses, trucks stop midway, and lakhs of migrant labourers with families, left in the lurch by their employers and governments, had to walk back, dying, being beaten, being run over and suffering on the way.

In this scenario, lockdown should be considered as a measure of the last resort to be used when no other steps work to contain the spread of the virus. Even if it is resorted to, it should be short.

Rather than intensifying public-health messaging and ramping up interventions, PM Modi and his government did the opposite. They held mass rallies ahead of elections and promoted the Kumbh Mela that drew millions of worshippers to a single town. Earlier in March, the widespread Holi celebrations by the Indians was also misplaced and allowed unhindered by the governments.

Prime Minister’s Citizen Assistance and Relief in Emergency Situations Fund (PM-CARES) was set up after the first scourge of Covid in 2020. The Government of India had initially claimed that the fund is a private fund, and denied that the PM-CARES Fund is a public fund. But, strangely, it was also told that donations to PM-CARES Fund will also qualify to be counted as Corporate Social Responsibility (CSR) expenditure under the Companies Act, 2013.

The opposition leaders, especially TMC MP Mohua Moitra, have raised question as to why there is no accountability of the PM-Cares Fund. She had also noted that an unfair treatment of identical contributions to PM-Cares and to the state relief funds is against public interest.

Further, critics have asked why PM-Cares fund was not used to fund the return of the migrant labourers many of whom were charged for their movements in extreme duress.

Several High Courts including the Delhi High Court, the Gujarat High Court and the Bombay High Court have pulled up the state and the central governments for their failures in Covid crisis management.

Many say the government has lost sight of its priorities. As cases soared to record highs in April, the government ordered Twitter and Facebook to remove posts critical of the authorities. Independent journalists have scrambled to identify the massive discrepancies between official figures and actual deaths. The UP government ordered attaching properties of those “who spread rumour” in social media on the crisis, and the police arrested a young boy desperately pleading all in social media to get oxygen for his out-of-breath grandfather who finally passed away.

What we now need is not managing perceptions, but managing the actual crisis by coordinating all possible government and non-governmental resources, domestic and foreign support, and correcting the past mistakes, apart from severe restrictions in affected areas for two weeks, while the capacities at every level are enhanced.