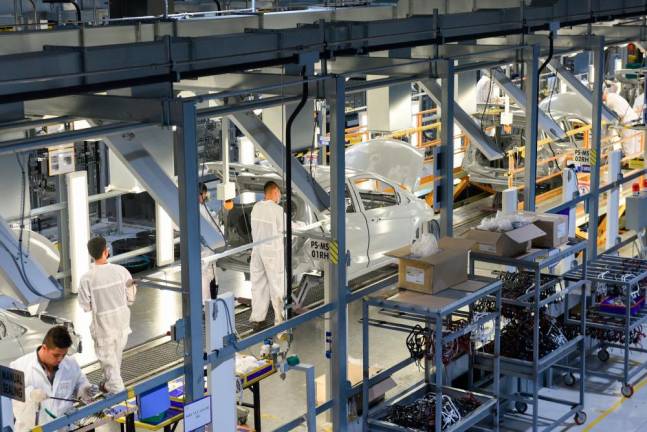 The country's official manufacturing purchasing managers' index (PMI) fell to 51.1 in April from 51.9 in March, data from the National Bureau of Statistics (NBS) showed on Friday, April 30.

It remained above the 50-point mark that separates growth from contraction on a monthly basis but was below the 51.7 expected in a Reuters poll of analysts.

"Some surveyed companies report that problems such as chip shortages, problems in international logistics, a shortage of containers, and rising freight rates are still severe," NBS statistician Zhao Qinghe said in a statement accompanying the official PMI.

That contrasted with a private-sector survey, also released on Friday, which showed factory activity in April expanded at the fastest pace in 4 months although businesses in that release also reported a sharp surge in input costs.

"With the economy already above its pre-virus trend and the policy stance less supportive, growth momentum will wane this year," analysts from Capital Economics said in a note on the PMI.

China's economic recovery quickened sharply in the 1st quarter of the year with record growth of 18.3%, shaking off the hit from last year's COVID-19-induced slump. Analysts now expect the world's second largest economy to grow 8.6% in 2021.

The robust economic recovery has outpaced rebounds seen in manufacturing competitors such as India, which are still struggling to contain new waves of coronavirus outbreaks.

Policymakers in Beijing have signaled they are keen to avoid sudden policy changes that could derail the recovery.

"We expect that an export demand recovery will help factory orders and that the May holiday will help the services sector," said Iris Pang, chief economist for Greater China at ING, in a note, referring to China's labor day vacation due to start on Saturday, May 1.

Overseas demand should also pick up as COVID-19 is brought under control in major markets like the United States and Europe, she said, but chip shortages could continue for several quarters and push up prices of electronic goods.

From delayed car deliveries to a supply shortfall in home appliances, businesses and consumers across the globe are facing the brunt of an unprecedented shortage in semiconductor microchips, exacerbated by sanctions against Chinese tech companies.

The official PMI, which largely focuses on big and state-owned firms, showed businesses again laid off workers in April after increasing hiring the month before for the first time in nearly a year. A subindex for employment slipped to 49.6 from 50.1 in March.

A gauge for new export orders stood at 50.4 in April, slipping from 51.2 a month earlier.

A subindex for raw material costs in the official PMI stood at 66.9 in April, easing from March's 69.4 but maintaining a rapid clip.

In the services sector, activity expanded for the 14th straight month, but at a slower pace, dragged down by a subindex for construction activity.