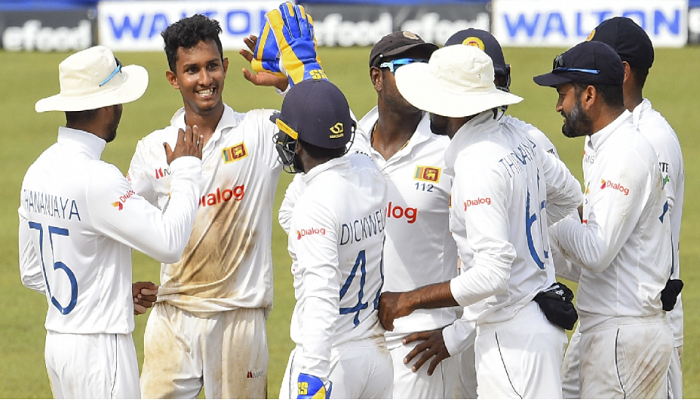 Praveen Jayawickrama bagged six wickets, which is the best bowling record for any Sri Lankan on debut and only the fourth time when a Sri Lankan took a five-for on debut.

Bangladesh lost their last six wickets for just 37 runs, with most of the batsmen falling prey to Jayawickrama’s left-arm spin.

Jayawickrama completed his five-wicket haul scalping the wicket of Mehidy Hasan Miraz during the 76th over. The right-handed batsman, who had recorded his maiden Test ton in the last series against West Indies at home, tried to clear the ball through the midwicket region but failed to execute it well and the ball hit his pad to prompt the umpire to signal him out.

Tamim Iqbal and Saif Hassan made a good start of 98 runs at the first wicket stand. They also had two fifty-plus partnerships at the third and fourth wicket stand.

Tamim was the highest run-getter with 92 while Mominul Haque and Mushfiqur Rahim ended up on 49 and 40 respectively.

Along with Jayawickrama, Suranga Lakmal and Ramesh Mendis also did well taking two wickets each.

Earlier, Sri Lankan openers— Dimuth Karunarate and Lahiru Thirimanne— hit a century each in the first innings of the match after choosing to bat first winning the toss. Oshada Fernando and Niroshan Dickwella also did well with the bat. They scored 81 and 77 not-out respectively.

For Bangladesh, Taskin bagged four wickets conceding 127 runs, which is now the best bowling figures for the right-arm pacer while Mehidy Hasan Miraz, Shoriful Islam and Taiju Islam took one wicket each.