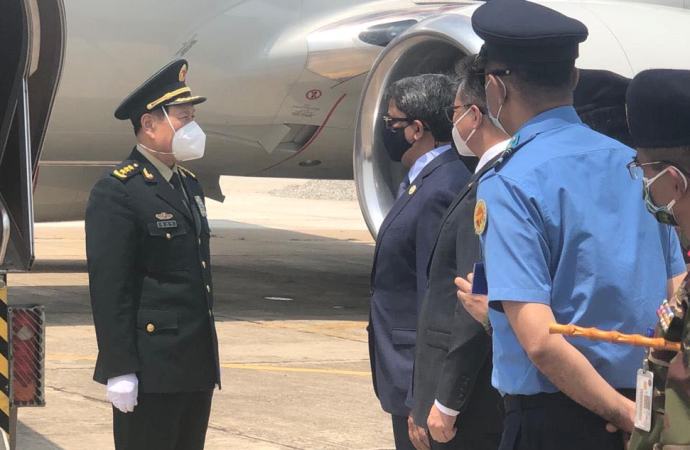 State Councilor and Head of China's Ministry of National Defence Wei Fenghe arrived in Dhaka on Tuesday morning on a brief but important visit when he will meet top government and defence leaders and discuss ways to further strengthen bilateral defence cooperation.

State Minister for Foreign Affairs M Shahriar Alam received the Chinese Defense Minister at Bangabandhu Air Base upon his arrival at 10:45 am.

Chinese Ambassador to Bangladesh Li Jiming was also present at the moment.

The visiting Chinese Defense Minister is scheduled to visit Bangabandhu Memorial Museum in Dhanmondi-32 to pay homage to Father of the Nation Bangabandhu Sheikh Mujibur Rahman.

He is expected to call on President M Abdul Hamid at Bangabhaban at 3:00pm and meet Chief of Army Staff General Aziz Ahmed.

China and Bangladesh are considered to be all-weather friends and cooperation in the areas of defence and economy is core to the bilateral relationship.

Notably, China is the only country with which Bangladesh has a defence cooperation agreement and it is the largest supplier of arms for Bangladesh defence. Bangladesh Navy purchased its first submarine from China.

China is Bangladesh’s biggest trading partner. Additionally, it is a development partner and is investing heavily in various infrastructure projects.

Wei Fenghe was scheduled to visit Bangladesh in November last year but it was postponed at the last minute. Since no specific reason has been cited, a host of speculations has surfaced with no tangible conclusion.

General Wei Fenghe was appointed to head China's Ministry of National Defence at the 13th National People's Congress on March 19, 2018.

Wei Fenghe, Han ethnicity, was born in February 1954 and is from Chiping, Shandong province, China. He joined the People's Liberation Army (PLA) in December 1970 and the Communist Party of China (CPC) in January 1972. He is a graduate of the PLA National Defense University (NDU) where he majored in coordinated operations command and was awarded a Bachelor degree.