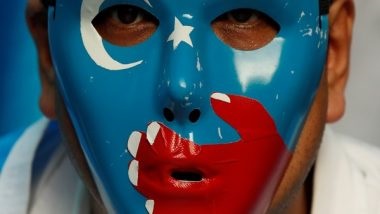 Chinese authorities in the northwest region of Xinjiang have sentenced an Uyghur author, whose work was targeted in a book burning campaign, to 20 years in prison, according to officials.
Ahtam Omer, who wrote a short story collection titled Child of the Eagle, had been missing since early 2017, Washington-based Radio Free Asia (RSA) reported.
Omer was detained in 2017 in Kashgar prefecture, a month after his brother and nephew, RSA reported citing a source. Giving a reason for detention, the authorities had said Omer had sent his elder brother's son to study in Egypt and sent money to him.
"Ahtam Omer was detained and taken from his home on March 12, 2017," the source said on condition of anonymity for fear of reprisal.
According to RSA, Omer was charged with "separatism" and sentenced to prison in a secret trial in Xinjiang's capital Urumqi in late 2018. Several of Omer's works, including Child of the Eagle, were burned by authorities in early 2020.
This decision was made in view of the book's growing impact on Uyghur society because of its focus on the themes of freedom and the spirit of struggle.
"The story was initially published in China Ethnicities Literature, a national-level journal, and long stayed far away from any official criticism as a result. However, by 2017, as a wave of 'looking to the past' had begun in the Xinjiang Uyghur Autonomous Region (XUAR), including in the field of literature, a number of books were rounded up under accusations that they contained separatist content," the RSA report said.
China has been rebuked globally for cracking down on Uyghur Muslims by sending them to mass detention camps, interfering in their religious activities. Beijing, however, continues to deny all charges.
Source: ANI