Nazanin Zaghari-Ratcliffe sentenced to a year in Iran prison 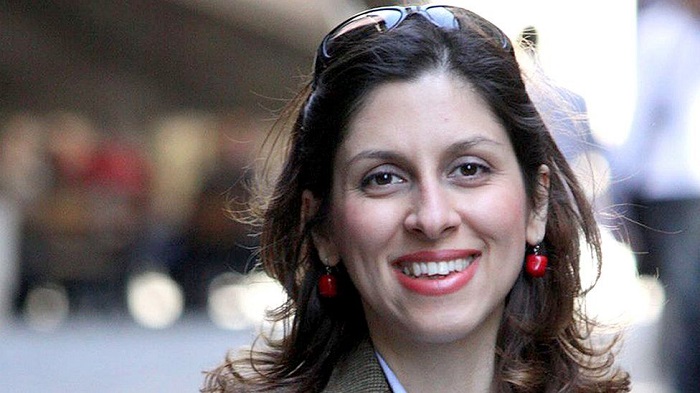 Nazanin Zaghari-Ratcliffe has been sentenced to a year in prison after being found guilty of propaganda activities against the regime in Iran.

The British-Iranian charity worker was also given a one-year ban from leaving the country.

Her lawyer said she had been accused of taking part in a demonstration in London 12 years ago and giving an interview to the BBC Persian service.

The prime minister said the UK would "redouble" efforts to free her.

Mrs Zaghari-Ratcliffe was first jailed in Iran in 2016 on spying charges, which she has always denied.

Confirming the latest sentence, her husband Richard Ratcliffe told the BBC the court's decision was a bad sign and "clearly a negotiating tactic" by the Iranian authorities - who are in the middle of discussions over the country's nuclear activities.

Mrs Zaghari-Ratcliffe has not been taken to prison yet, her husband said, and plans to appeal.

Prime Minister Boris Johnson said: "I don't think it is right at all that Nazanin should be sentenced to any more time in jail."

He said it was "wrong that she is there in the first place" and pledged to work hard to secure her release so she could return to her family, "just as we work for all our dual national cases in Iran".

"The government will not stop, we will redouble our efforts, and we are working with our American friends on this issue as well," Mr Johnson said.

Mr Ratcliffe has not seen his wife in person since 2016 and their daughter Gabriella, who was with her mother in Tehran when she was arrested, has been in the UK since 2019 where she began school.

Mr Ratcliffe maintains his wife was imprisoned as leverage for a debt owed by the UK over the failure to deliver tanks to Iran in 1979.

He says the case may also be caught up in negotiations over the international agreement to limit Iran's enrichments of nuclear material, which the UK and others are trying to revive.

Last year, Mrs Zaghari-Ratcliffe was moved from prison due to the coronavirus crisis and held under house arrest in Tehran until March, when her ankle tag was removed.

But she returned to court later that month to face the latest propaganda charges.

Her MP, Tulip Siddiq, said: "This is a terrible blow for Nazanin and her family, who have been hoping and praying that she would soon be free to come home."

She said it was "devastating" to see Mrs Zaghari-Ratcliffe "being abusively used as a bargaining chip".

But Ms Siddiq said the government's behind-the-scenes efforts to secure her release had "clearly failed" and "we deserve an urgent explanation from minsters about what has happened".

Former foreign secretary Jeremy Hunt said "Iran's cruelty seems to know no bounds" but he questioned why the UK had not simply settled the tank debt, given it accepted it owed the money.

"With Nazanin's health deteriorating and her family in distress, strong words must be backed by real action," she said.

A medical evaluation carried out for the human rights charity Redress recently found Mrs Zaghari-Ratcliffe had post-traumatic stress disorder, depression and obsessive stress disorder due to "traumatising experiences in the prisons of Iran" and the uncertainty about her fate.

She told doctors that during solitary confinement at the beginning of her sentence in 2016, she was interrogated - often while blindfolded - for eight to nine hours a day.

Redress director Rupert Skilbeck said a further sentence could cause "irreparable damage to her health" after the "torture and ill-treatment" she had already been subjected to.

"Nazanin has never received a fair trial in Iran and is innocent of the allegations made against her. Her detention has always been illegal under international law," he said.

"The case must be dismissed and she should be allowed to return to her husband and daughter in the UK immediately."