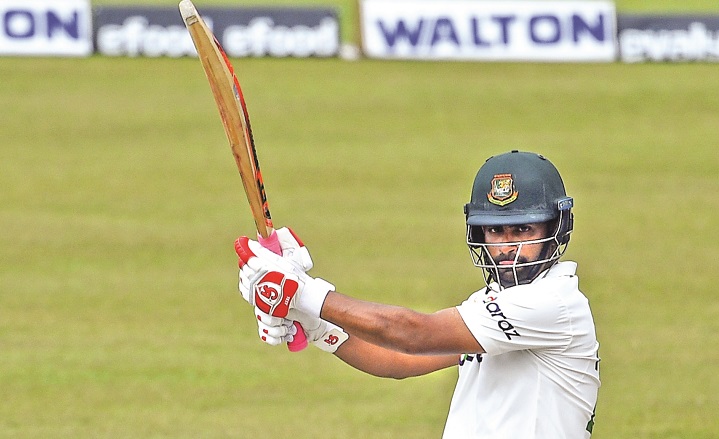 Bangladesh opener Tamim Iqbal plays a shot during the fifth day of the first Test against Sri Lanka in Kandy on Sunday. – SLC photo

Bangladesh finally opened its account in the ICC World Test Championship points table after they played a tame draw against hosts Sri Lanka in the first of the two-match Test series at Pallekele International Cricket Stadium in Kandy on Sunday.

Tamim Iqbal scored an unbeaten 74 off 98 balls while skipper Mominul Haque made 23 not out as Bangladesh went to tea break on the fifth day scoring 100-2 in 33 overs in their second innings before rain forced the suspension of the third session’s play, forcing the match to end in stalemate.

Bangladesh, who earlier lost all their five World Test Championship matches, earned 20 points from the game while Sri Lanka took their tally to 140 points after the draw against the Tigers.

Unlike the previous days’ dull outings, the first few hours on the final day produced some excitement with Sri Lankan pacer Suranga Lakmal taking two early wickets in Bangladesh’s second innings that brought some panic in the Tigers’ dressing room.

Opener Saif Hassan, who made a duck in the first innings, continued his poor performance with the bat as he could make only one run in the second innings before he was caught behind off Lakmal.

Bangladesh’s first innings hero Najmul Hossain followed Saif soon as he was bowled by Lakmal for nought and Bangladesh found them struggling at 27-2 with more than 60 overs still to be played on the final day.

Najmul, who made 163 runs in the first innings, also joined a group of selective Bangladeshi players – Shakib Al Hasan, Tamim Iqbal, Javed Omar and Mohammad Ashraful after getting out on zero as all these cricketers scored a hundred and a duck in the same Test.

Experienced Tamim and Mominul then steadied Bangladesh innings and put up a 73-run unbeaten stand for the third wicket and ensured no more damage in their innings.

Tamim, was, however, given out on 29 at the silly point but the reply showed the ball had bounced in front of the fielder before hitting his toe, forcing umpire Kumar Dharmasena to change his decision.

Tamim, who yet again took an aggressive approach, completed his fifty off 56 balls and his 30th Test fifty came when Bangladesh’s score was just 52. The left-hander struck 10 fours and three sixes in his exciting innings.

“I think we should take the result,” Mominul said after the match.

“After losing a home series, I think that the draw is a positive result and it will give confidence to everyone. Everyone played as a unit,” he added.

Earlier, Bangladeshi bowlers were successful in taking five wickets of Sri Lanka in the first session despite the hosts making 136 runs in 30 overs after resuming on 512-4.

Wanindu Hasaranga made 43 runs while Niroshan Dickwella and Lakmal scored 31 and 23 not out before Sri Lanka’s declaration.

Karunaratne was adjudged as the player of the match.

“On this pitch, a fifty wasn’t enough for me,” Karunaratne said.

“I saw that almost everyone in the Bangladesh team got a fifty. I’m not the kind of player who’s satisfied with just getting a fifty on this kind of pitch. I wanted to turn my fifty into a hundred and my hundred into a one-fifty.

“And you very rarely get pitches like this in Sri Lanka - you generally get tracks that turn a lot. And when you go overseas, you get a lot of seaming conditions. I wanted to get the maximum out of this pitch,” he added.

The second Test will start on Thursday at the same venue.