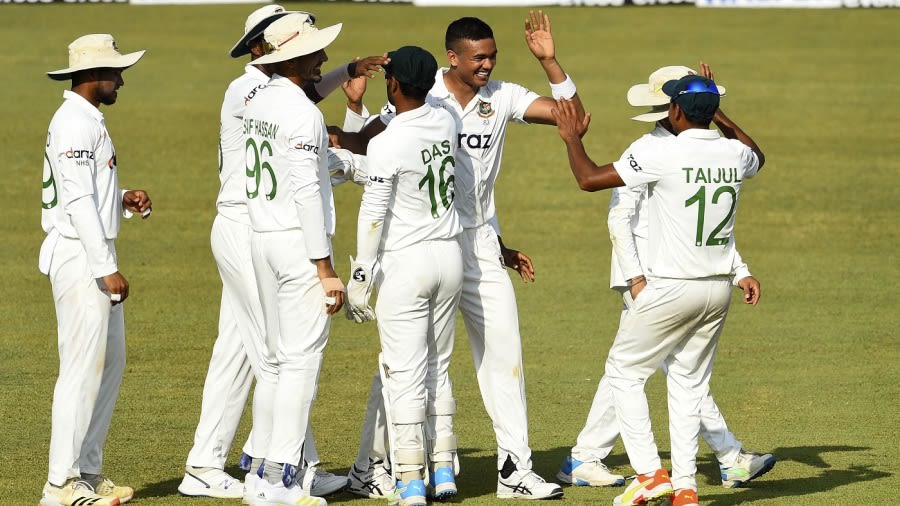 Bangladesh lost two early wickets in their second innings of the Kandy Test against Sri Lanka on Saturday.

Sri Lanka declared their first innings on 648 for eight in 179 overs securing a 107-run first-innings lead. Bangladesh were sent to bat after the lunch break of day five.

Saif Hassan failed to impress with the bat once again he fell for one playing only eight balls. He suffered a duck in the first innings facing six deliveries.

Najmul Hossain Shanto, who had hit a ton in the first innings, returned a duck in the second innings facing eight balls. Both of the first wickets were taken by Suranka Lakmal, the most experienced bowler of the Sri Lankan attack.

Bangladesh removed five Sri Lankan batsmen in the first session of the final day with one run out. Bangladesh will have to bat at least 68 overs to end this Test in a draw.

Earlier, Bangladesh declared the first innings at 541 for seven wickets in 173 overs before the lunch break of day three.

Najmul Hossain Shanto and Mominul Haque dominate in the first two days as they have struck a century each. It was the first Test for Najmul, and Mominul recorded his maiden century in away Tests.

Tamim Iqbal, Mushfiqur Rahim and Liton Das have struck a fifty each for the visitors.

It was the sixth-highest Test innings for the Tigers, and third highest in the overseas Tests.

For Sri Lanka, Vishwa Fernando was the most successful bowler who bagged four wickets in the batting paradise conceding 96 runs in 35 overs while Suranga Lakmal, Lahiru Kumara and Dhananjaya de Silva took one wicket each.