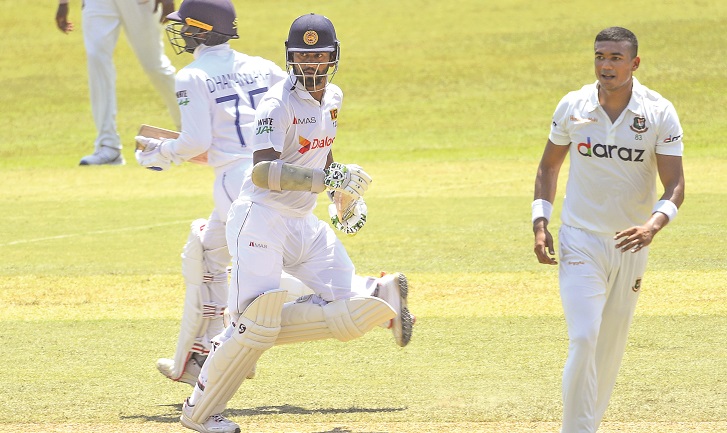 Bangladeshi bowlers passed a very frustrating day in Kandy as they remained wicketless on the fourth day of the first Test thanks to extraordinary batting efforts from Sri Lankan skipper Dimuth Karunaratne and Dhananjaya de Silva on Saturday.

Karunaratne struck his maiden double ton while Dhananjaya completed his seventh Test ton as the hosts made 512-3 in their first innings, replying to Bangladesh’s 541-7d as the match is heading towards a dull draw at Pallekele International Cricket Stadium.

Resuming an overnight score of 229-3, Karunaratne and Dhananjaya played out the whole day and narrowed down the deficit to 29 runs after making Bangladeshi bowlers toil at a completely batting-friendly surface that hardly showed any assistance to the bowlers on the fourth day of the Test match.

Karunaratne, who resumed on 85, became the first batsman to score a double hundred at the venue and remained not out on 234 off 419 balls with hitting 25 fours at stumps on day four which saw an early finish due to bad light.

Dhananjaya gave his skipper ample support from the other hand, making 154 off 278 balls as the batters put up an unbroken stand of 322 runs for the fourth wicket, the highest fourth-wicket partnership stand in a Bangladesh versus Sri Lanka Test while it is also the highest partnership record in the venue.

Both the Sri Lankan batsmen made a cautious start on the fourth day but as the day progressed, they started to punish Bangladeshi bowlers all around the ground.

Bangladesh took the new ball at 81.1 overs but it hardly tested both the set batsmen as they took advantage of the surface as well as the condition to dominate over the visitors.

Karunaratne completed his 11th Test ton in the first hour of the day while Dhananjaya also reached his fifth before the lunch break as the pair added 102 runs in the first session of day four.

Karunaratne and Dhananjaya remained strong in the second session and they capitalised on Bangladeshi bowlers’ indiscipline bowling by making 61 runs off the first 10 overs after the lunch break.

“Actually bowling in such wicket in a Test is very difficult for the bowlers,” pacer Taskin Ahmed, who bowled 25 overs in the innings, said after the end of the day’s play.

“Lakmal (Suranga) also bowled 35 (36) overs. There is little room to create a chance in the wicket.

“There is a high chance the match will end in a draw. But as it is cricket, anything can happen at any time,” Taskin added.

Bangladeshi bowlers brought some resistance afterwards but failed to achieve any breakthrough and the hosts made 111 runs in 30 overs in the second session with Dhananjaya joining his skipper to score their second Test ton against Bangladesh.

The match was stopped due to bad light five overs after the tea break and when the match resumed again Karunaratne completed his first double ton with a boundary.

Sri Lanka was cruising towards taking a lead over Bangladesh but bad light again forced the umpires to finally call it a day after 76 overs play on the fourth day.