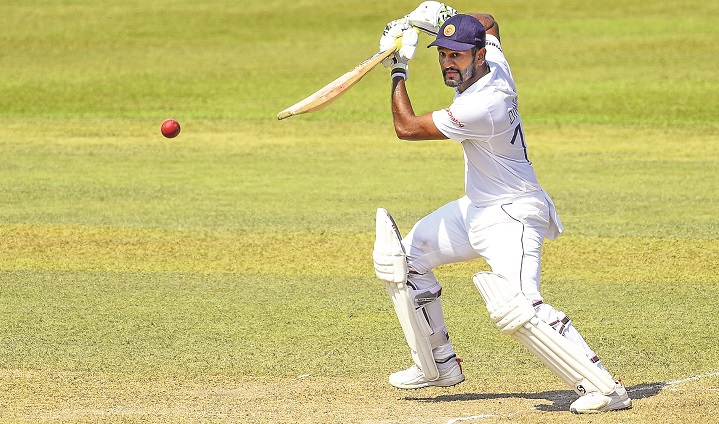 Sri Lanka captain Dimuth Karunaratne plays a shot during the third day of their first Test against Bangladesh at Pallekele International Cricket Stadium in Kandy on Friday. – SLC PHOTO

Sri Lankan Skipper Dimuth Karunaratne led a fightback as he struck unbeaten 85 runs while Lahiru Thirimanne made 58 runs to guide the hosts to score 229-3 in 73 overs in their first innings against Bangladesh on the third day of the first Test in Kandy on Friday.

Bangladesh earlier declared their first innings on 541-7 in the first session of day three after resuming the overnight score of 474-4 and they are still leading by 312 runs at Pallekele International Cricket Stadium.

Two overnight batsmen – Mushfiqur Rahim and Liton Das both completed their fifties and made 68 not out and 50 runs respectively.

Sri Lanka made a strong start replying to Bangladesh’s mammoth first innings total as both the openers - Karunaratne and Thirimanne put up a 114-run stand before off-spinner Mehidy Hasan trapped the latter for lbw just before the tea break.

Thirimanne could have dismissed a few overs before on the same score but Bangladesh’s failure in taking a review for lbw off Taijul Islam saved him that time.

Thirimanne was earlier given out on one off Taskin Ahmed’s delivery but the on-field umpire had to change his decision after the ball-tracking showed the ball would miss the off-stump.

Bangladesh’s bowlers were successful to take two more wickets in the late session as Taskin dismissed Oshada Fernando (20) while Taijul bowled Angelo Mathews (25) with a superb delivery. Dhananjaya de Silva remained not out on 26 along with his skipper.

Bangladesh could have gotten the prized wicket of Karunaratne just before the stumps when they reviewed for an lbw off Taijul but the third umpire stayed with the on-field umpire’s decision without properly using the UltraEdge that clearly showed the ball hit Karunaratne’s toes first and the ball would have hit the stumps.

Just one ball earlier in the same over, Karunaratne was given out for lbw but the decision was overturned by the third umpire after the ball-tracking showed the ball would eventually miss the stumps.

Bangladesh earlier batted for 18 overs on the third day and added 67 runs to their overnight score before making their declaration.

Liton was the first man to be dismissed on the day just after completing his eighth Test fifty as he was caught at gully by Oshada Fernando off Vishwa Fernando.

Mehidy, who survived two reviews, was finally dismissed by pacer Suranga Lakmal in the same over after scoring three runs while Taijul was also caught behind off Fernando for two.

Mushfiqur’s 23rd Test fifty ensured Bangladesh posting a colossal total against the hosts and helped the tourists record the highest total in Pallekele surpassing India’s 487 in 2017.