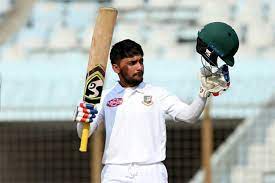 Mominul Haque finally ended his century drought in overseas country after with a stylish ton in the first Test against Sri Lanka on Thursday at the Pallekele International Cricket Stadium.

The first overseas century in his career came in his 43rd match and at a moment when he was under severe pressure following Bangladesh’s only one victory in six matches under his captaincy.

At the same time while he averaged 56.39 at home, on foreign soil, he had meager average of 22.30, which was another point to criticize him vehemently.

Ahead of this century, Mominul had 10 centuries, highest for any Bangladeshi batsman, to his name in only 42 matches. Amongst the 10 centuries, seven came in Zahur Ahmed Chowdhury Stadium in Chattogram while the rest of the three tons, he struck at Sher-e-Bangla National Cricket Stadium in Mirpur, Dhaka. So he was considered as home track bully.

Given the talent and ability to bat for a longer period against any kind of quality attack, it was however surprising, as to why Mominul couldn’t make any century in overseas condition.

Experts earlier said there was psychological block for which Mominul simply couldn’t convert his good start to century in overseas country.

“It was more of a psychological block than his lack of ability to hit a century in the overseas condition,” cricket expert and former Bangladesh captain Gazi Ashraf Lipu once said.

“The critics had a point that he has no century on foreign soil and they use it against him but I think the century would come and it is a matter of time. Only he needs to be patient.”

And Mominul really remained patient in this innings after Tamim Iqbal laid the foundation with a whirlwind 90 runs knock. He reached his half-century off 117 balls and with Nazmul Hossain Shanto then kept Sri Lanka bowlers bay further, sharing 242-run partnership for the third wicket stand. While Shanto brought up his maiden ton, Mominul was not out on 64 on day one, indicating that the draught could be ended on day two.

And he had done it in style. As Dananjaya de Silva gave some width, Mominul confidently cut it wide of the backward point fielder for his 11th four, which brought up his 11th century and first overseas ton off 224 ball.

The celebration then began, the helmet came off and he brandished his bat to the dressing room, who all are elated for their captain. In fact he broke the jinx in a country, where he began his career.

He had a fairytale start to his career as he scored seven half-centuries and four centuries in his first 12 Tests, for which he was once boldly compared to greatest batsman of all time Sir Don Bradman. However like Bradman, he couldn’t be super consistent but earned the accolade of best Test batsman of the country.

This was moreover his third century against Sri Lanka in last five innings.