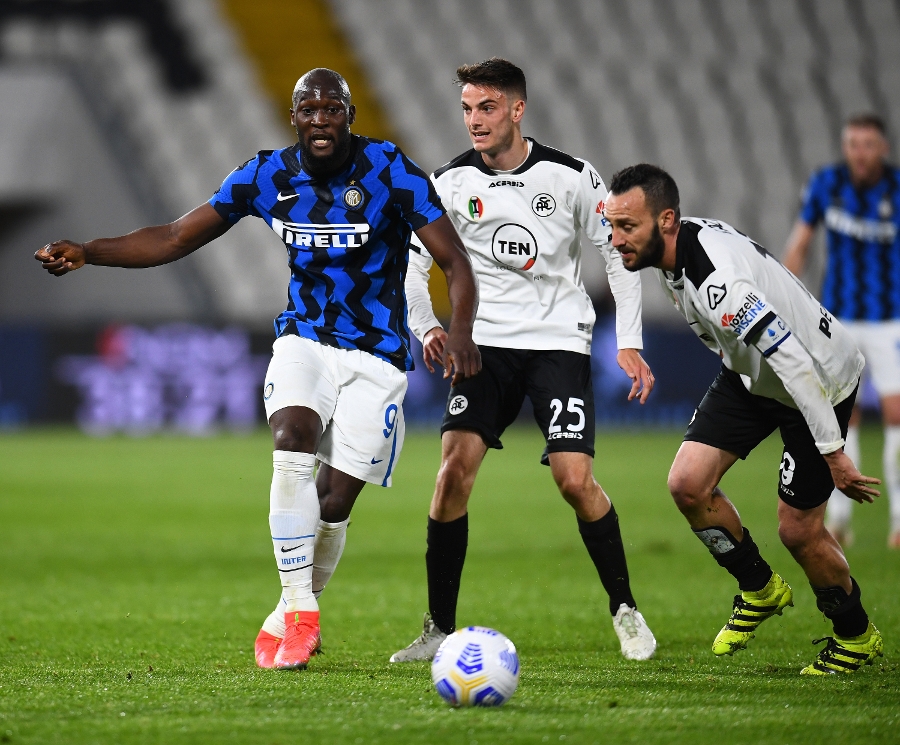 Inter Milan was held to a 1-1 draw at relegation-threatened Spezia but still extended its lead at the top of the Serie A table on Wednesday.

Ivan Perišić canceled out Diego Farias’ opener for Spezia as Inter moved 10 points above second-place AC Milan after the Rossoneri lost 2-1 at home to Sassuolo.

“It’s inevitable to feel a bit of pressure, especially as lots of our players are challenging for something important for the first time," Inter coach Antonio Conte said. “But it’s OK, the performance was there. We must live with the pressure.”

Juventus came from behind to win 3-1 against Parma to move into third ahead of Atalanta's match at Roma on Thursday.

Inter was one of the three Italian clubs involved in the attempt to launch a Super League. Along with Juventus and Milan, the Nerazzurri abandoned the project on Wednesday.

“As a sportsman I think you should never forget tradition,” Conte said. “Sport should be a meritocracy,. We work to try to win or to achieve something.

“But it’s also right for UEFA to reflect on all this. ... The clubs should be rewarded in a fairer manner, it’s the clubs who invest in the players, coaches and everything. If you earn 10 and give three to the clubs, it’s not right. It’s the clubs that invest the money, the proportion they get should be changed.”

Inter had seen its 11-match winning run come to an end with a draw at Napoli on Sunday but knew it could move 12 points clear after Milan’s loss.

But it was Spezia which took a surprise lead in the 12th minute when Farias’ snapshot went under Inter goalkeeper Samir Handanović. It was another howler from the veteran, just three days after an own goal against Napoli.

Inter piled on the pressure and it paid off six minutes from halftime when Achraf Hakimi rolled a ball across from the right and Perišić poked it in at the far post.

Inter forward Lautaro Martínez hit the post twice in the second half while the Nerazzurri also had two goals ruled out for offside late on.

Substitute Giacomo Raspadori scored twice in the final 14 minutes for Sassuolo to damage Milan’s chances of holding onto a Champions League spot.

Second-place Milan was firmly in the title race at the start of the year but is now looking nervously over its shoulder.

Atalanta could move a point above Milan if it beats Roma. Fifth-place Napoli also plays Thursday and can close the gap to three points with a win at home to Lazio.

Zlatan Ibrahimović was out injured but Milan scored the opener in the 30th minute when Hakan Çalhanoğlu curled into the top right corner.

Both teams had chances before Sassuolo turned the match on its head.

Raspadori passed to Jeremy Toljan on the right side of the area and his shot was deflected back into the path of his teammate, who turned it in at full stretch.

Raspadori doubled his tally seven minutes later with a low, angled shot which went in off the left post.

Juventus moved just a point behind Milan but was forced to come from behind after Gastón Brugman's sublime free-kick gave relegation-threatened Parma the lead in the 25th.

Alex Sandro put Juventus in front with a goal either side of the interval and Matthijs de Ligt sealed the result in the 68th.

Cagliari inched closer to safety after winning 1-0 at Udinese.

The Sardinian side moved to within three points of 17th-place Benevento, which drew 2-2 at fellow struggler Genoa.

Torino also slipped to just three points above the drop after a 1-1 draw at Bologna.