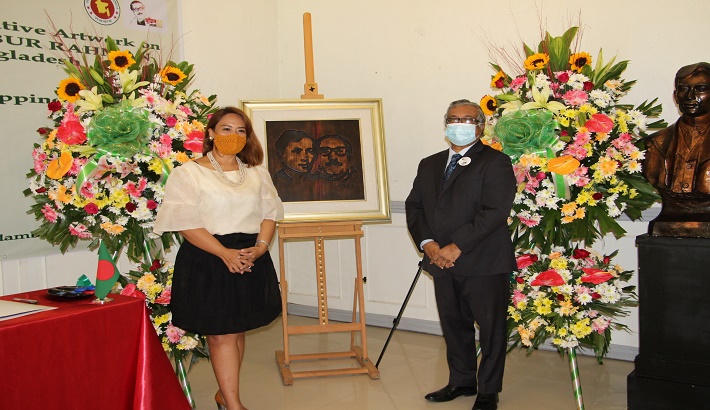 As a part of the birth centenary celebration of the Father of the Nation of Bangladesh, Bangladesh Embassy in Manila handed over a commemorative artwork on Bangabandhu Sheikh Mujibur Rahman and the Filipino National Hero Dr. Jose Rizal as a permanent showpiece to the Jose Rizal Museum.

The museum is dedicated to the Filipino National Hero Dr. Jose Rizal at his ancestral house in the district of Calamba.

The woodcarving was done by Filipino artist Nicolas P. Aca Jr. who was highly inspired by these two great Leaders who fought against colonial powers for emancipation of their motherlands and gave their lives for their people.

The work reflects engraved portraits of the two leaders with a red line flowing in the background symbolizing the supreme sacrifices they made for their people.

The handing-over ceremony was conducted with a restricted audience as per the local health protocols.

In the handing-over ceremony Curetor and officials of the Museum, Calamba Mayor’s Office, Cultural Affairs Office, Tourism Office, Cultural Heritage & Historical Society, Philippine Information Agency and the Historic Commission of the Philippines (NHCP) were present, among others, said a press release of the Bangladesh Embassy in Philippines on Wednesday (April 21).

Ambassador Asad Alam Siam in his speech in the unveiling ceremony, elaborated the life and philosophy of the Father of Nation Bangabandhu Sheikh Mujibur Rahman,  including how he guided his people to freedom.

He thanked the NHCP and the museum for accepting the gift. He hoped that it would appeal to the visitors to discover the similar journey of two people and the two leaders.

The Curator of the Museum Ms ZarahEscueta thanked the Embassy for making the Rizal museum a partner in the celebration of the Birth Centenary of the Father of the Nation of Bangladesh and said that his life and work would inspire all the visitors of the museum and they would be more interested in his life and ideals.

She also mentioned that the life and philosophy of Bangabandhu make him an icon of global peace and freedom.

With the handing-over ceremony, it begins a two-month long exhibition in the museum which will display the artwork along with other exhibits on life and work of the Father of the Nation including his memoir, life sketch, historical photos, and books on him. Thereafter, the work would go to the museum’s permanent collection as a gift from this Embassy.