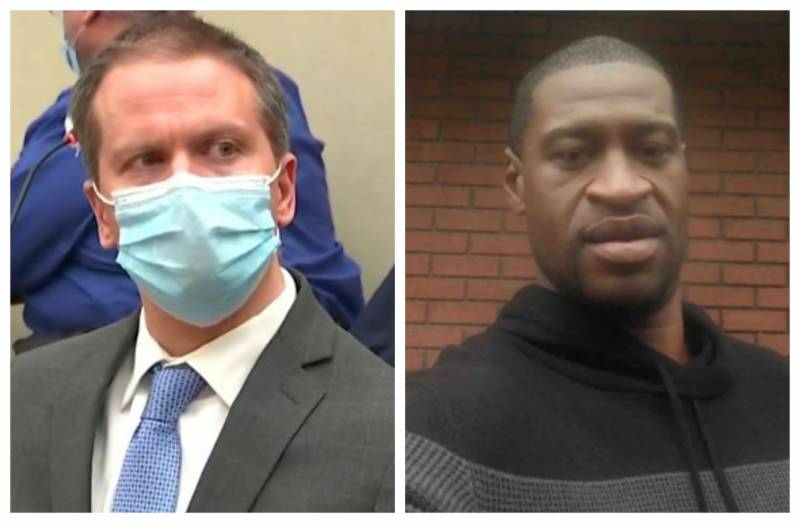 A US jury has found a former police officer guilty of murder over the death of African-American George Floyd on a Minneapolis street last year.

Derek Chauvin, 45, was filmed kneeling on Mr Floyd's neck for more than nine minutes during his arrest last May.

The widely watched footage sparked worldwide protests against racism and excessive use of force by police.

He will remain in custody until he is sentenced and could spend decades in jail.

The 12-member jury took less than a day to reach their verdict, which followed a highly-charged, three-week trial that left Minneapolis on edge.

After both sides presented closing arguments on Monday, the jury was isolated in a hotel with no outside contact so they could deliberate on a verdict, a process known as sequestration.

Jurors had to agree unanimously and were told they could not return home until they had made their decision.

The verdict prompted celebratory scenes outside the court, where several hundred people cheered as it was announced.

The Floyd family's lawyer, Ben Crump, said it marked a "turning point in history" for the US.

"Painfully earned justice has finally arrived," he tweeted. [It] sends a clear message on the need for accountability of law enforcement."

Mr Biden was heard saying that "at least now there is some justice".

"We're gonna get a lot more done. This is going to be a first shot at dealing with genuine systemic racism," the president said.

And in a nationally televised remarks shortly afterwards, Mr Biden said: "Systemic racism is a stain on the whole nation's soul."

Meanwhile, Ms Harris urged lawmakers to pass the George Floyd bill aimed at reforming policing in the US. "This bill is part of George Floyd's legacy. This work is long overdue," she said.

The Minneapolis police federation, a not-for-profit organisation representing police - thanked the jury for their "dedicated work" shouldering "an enormous burden".

"We also want to reach out to the community and still express our deep remorse for their pain, as we feel it every day as well. There are no winners in this case and we respect the jury's decision," the federation said.

"We need the political pandering to stop and the race-baiting of elected officials to stop."

Chauvin is expected to appeal against the verdict, US media report.

They say one of the most likely avenues of appeal is the huge publicity given to the case, with the defence team arguing that this might have influenced the jury.

Also, Presiding Judge Peter Cahill said on Monday that public comments by Democrat Congresswoman Maxine Waters could be grounds for an appeal.

Over the weekend, Ms Waters had urged protesters to "stay on the street" and "get more confrontational" if Chauvin were acquitted.

On hearing the verdict, people were screaming and cheering, and a little girl in a pink coat held up a tiny fist, in jubilation.

"It's a good day in Minneapolis," says 21-year-old Kenneth Nwachi. "It's a blessing."

Activists say justice has been done, and they will feel as though a weight has been lifted from their shoulders.

Their relief is shared by many in the city, a place that has been on edge for months. It is a landmark case for police use of force against black people, and the verdict marks a significant break with the past.

Few officers are charged with manslaughter or murder, and fewer still are convicted.

But protesters say the calls for justice for George Floyd do not stop after this verdict.