Mominul counts on pacers for away Test win 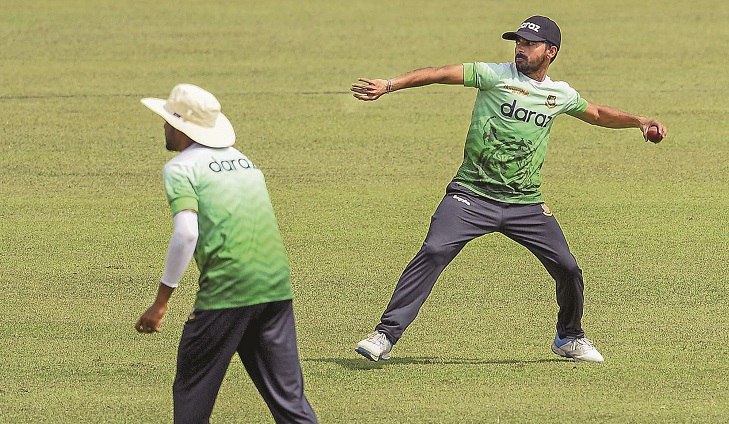 Bangladesh Test skipper Mominul Haque believed that the pacers will play a big role in the two-Test series against Sri Lanka, starting today at Pallekele International Cricket Stadium in Kandy.

“I’d say the pacers are going to have a big impact in the upcoming series,” Mominul told reporters in a virtual press conference ahead of the series opener on Tuesday.

“I’m depending mostly on the experienced campaigners, as Rahi (Abu Jayed), Ebadot (Hossain) and Taskin (Ahmed) are the pacers to depend on but there are a couple of new guys as well.

“We are going to have a pace-dependent bowling attack but I don’t think it will compromise our bowling strength, rather it will encourage the pacers to be more competitive,” he added.

Bangladesh named a 15-member squad for the first Test on the same day with keeping four pacers - Taskin Ahmed, Ebadot Hossain, Abu Jayed and uncapped Shoriful Islam and according to the team management, Bangladesh is likely to field three pacers in their playing XI in the first Test.

Ahead of the Test series, Bangladesh couldn’t have an ideal preparation as half of the 15-member Test squad came to Sri Lanka after competing in the limited-over series against New Zealand in New Zealand.

Only Test specialists like Mominul and some other cricketers played two rounds of the National Cricket League, the country’s traditional first-class competition in recent months.

Mominul, however, emphasised mental and physical adjustments to turn the table abroad, considering Bangladesh just won one Test match in the last four years abroad when they defeated Sri Lanka by four wickets in Colombo during their 100th Test match and won just one out of their last nine Tests.

“I wouldn’t say that we have the best possible preparation but according to the condition, we couldn’t have better. We had practise sessions, a practice match and we need to be 100 percent both physically and mentally if we are to represent our country,” said Mominul.

“Rather than thinking about what had happened we are considering being positive,” he added.

Mominul also claimed that he is not under any kind of pressure despite not performing as a Test unit.

Bangladesh came into the series on the back of eight losses on the trot in all formats but among them losing the two-match Test series against West Indies at home hurt their confidence so badly.

“I’m under no pressure whatsoever and the same goes for my team. We have come here to win matches so we are going to give our all to do that.

“Obviously, Sri Lanka is a very good team and we couldn’t do well in our last two Test matches; but still, we aren’t considering looking in the rear-view mirror, as if we can keep our process at the right place and play good cricket for five days, then, of course, we will win,” said Mominul.