Smaller and better smartphone cameras are on the way 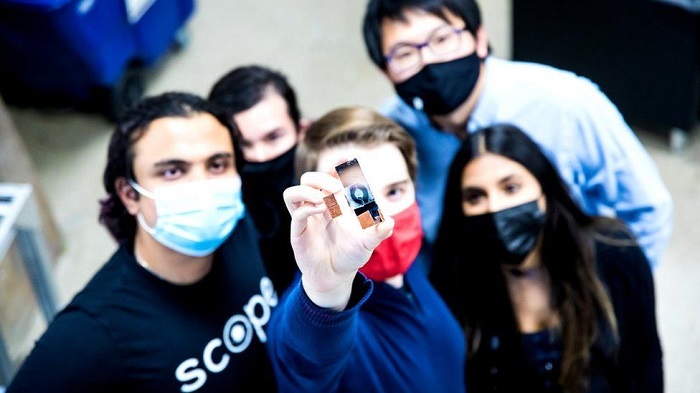 "Today's smartphone cameras can make a better image than cameras I paid NZ$10,000 ($7,110; £5,165) for only 20 years ago," says Tom Ang, an Auckland-based professional photographer and author of more than 30 books on digital photography.

The cameras embedded in our smartphones have become so good, many of those too young to remember anything different would scoff at the idea of carting around a separate camera.

While Mr Ang is still fond of his high-end DSLR cameras, most of us rely on smartphone photos and videos to capture our memorable events and duckface selfies.

And there is plenty of room for improvement. Most smartphones use a stacked system of lenses, which adds both weight and bulk, and ruins a phone's sleek design on its backside.

But that could all change in the near future with new lens technology, including improved camera zooming and features that mean brighter photos, all while reducing the space and weight this takes up on your handset.

When you want to zoom in while using your smartphone camera, you have to pinch the screen to get the lens closer to the subject.

The phone's software is cropping the frame and blowing it up, so the image quality is getting worse and can result in blurry photos.
At Scope Photonics in Ontario, Canada, they want to create lossless zoom for all kinds of images, which means any photo enjoying a close-up will remain consistently sharp.

Chief executive Holden Beggs and his team have been working on a type of technology harnessing liquid crystals, made popular by liquid-crystal display (LCD) screens found in living rooms and retail displays across the world.


Scope Photonics has found a way to make liquid crystals "spin like tops" and reorganise themselves based on how light moves through them. The effect is to mimic a zoom lens system.

So instead of a series of lenses, Scope's system can zoom in and out with just the one lens.

The International Runner Up for the 2020 James Dyson Award, Scope is prototyping the lens technology on medical devices first, and aims to bring these lenses to smartphone cameras in three years.
"I'm comfortable in predicting we can achieve 10 times zoom with our liquid crystals, but this innovation offers a lot of opportunity for growth so you never know where we'll be at in a few years' time," Mr Beggs says.

Emerging from Cambridge, Massachusetts, another start-up wants to get rid of that "camera bump" found on the back of your smartphone and brighten and sharpen images at the same time.

Our phones use plastic and glass lens elements stacked over an image sensor, but Metalenz's design harnesses a single lens built on a glass wafer between just one and three square millimetres in size.

Its silicon nanostructures manipulate light rays in a way that allows for brighter and sharper images compared to standard lens elements.
Chief executive Robert Devlin says Metalenz is also working on fine-tuning the focus application on cameras, including for video imaging.

"We want to improve real-time auto-focus, so the camera is picking out the right object to put into focus," he says.

Another sector Metalenz is eyeing is virtual reality and augmented reality, which require headsets and goggles made up of image sensors and lenses.

"In virtual reality especially, those companies want to reduce the bulkiness of those headsets, and that's what we want to do, and it's what we do now with our very thin lenses," Mr Devlin says.

In Utah, a group of researchers have developed a lens a hundred times lighter and a thousand times thinner than the iPhone 11's lenses.

Rajesh Menon, associate professor in electrical and computer engineering at Utah University, says a common problem for current phone cameras is spotting out-of-focus reds and blues and correcting - that often requires an additional lens.
The lens he helped create comprises thousands of microstructures instead of one large curved element. All these programmed microstructures focus light on an image sensor in the same way as thicker traditional lenses.

"Its thinness is a feature, not a by-product," says Prof Menon. "When you can reduce the size of all the lenses you normally have in a camera, which are all designed to correct for colour aberrations, one single lens can simplify the process."

Reducing the weight of imaging devices, even if it's just a fraction of a gram, can be a big deal for delicate technologies such as satellites and drones, he adds.

Prof Menon predicts his team's lens technology will come to smartphones in three to five years. Currently, his technology is being tested on imaging projects led by the US Department of Defense.

It is apparent lens innovation is moving at a quick pace, but firms also have to remember that smartphone users are accustomed to simplicity.

"If you offer, say, true optical zoom on a smartphone that rivals proper cameras, you also raise the barrier to use. If people need an instruction manual for their smartphone camera, you've stuffed up," says Mr Ang.