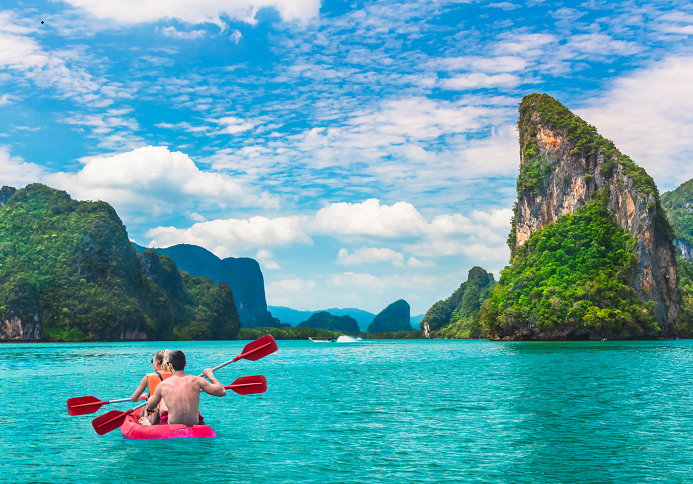 Pre-pandemic, Phuket's Patong Beach was not a place you'd go for peace and quiet.
On any given day during high season, this popular Thai beach town would be filled with tourists from all around the world. Jet skis, longtails and speed boats roared through its bright blue waters. Some pulled parasails, their colorful puffs of nylon kites moving through the skies, keeping harnessed bodies afloat.
Massive cruise ships could sometimes be seen anchored offshore.

In the evenings, the streets adjacent to Patong's beach were packed with travelers till long after the sun slipped into the Andaman Sea horizon, the air filled with the shouts of taxi drivers, massage staff and restaurant workers, all in pursuit of the next customer.

These days, Patong is unrecognizable. Its beach -- a long, clean strip of beige sand -- is free of crowds.
Nearby, the majority of businesses are shuttered, some with "For Rent" signs. Door handles are wrapped in chains and padlocks, while closed hotels have put up rope fences blocking the driveways to their entrances.
Even American chain outlets like McDonald's, Burger King and Starbucks are shut.

Further south, similar scenes await visitors to the once popular beaches of Kata and Karon.
"The areas of Phuket island that have been hit the hardest are most definitely Patong, Karon and Kata beaches," says Anthony Lark, president of the Phuket Hotels Association. "These three enclaves were 95% reliant on international tourism. And it dried up."

For the few who decided to stick it out, life has been incredibly difficult.

"It's very bad for us," says Su Sutam, manager of Lobster & Prawn Restaurant on Kata Beach.
"Not many people come. We have only Thai people but not so many. In one day, only one or two tables. Normally we are full downstairs and upstairs."

He says staff are only getting paid half of their regular salaries until international tourists return.
For the Phuket Elephant Sanctuary, founded in 2016, closing shop till the tourists return isn't an option. Whether visitors come or not, the facility's 12 retired working elephants, which live in the sanctuary's 30 acres of jungle, need to be fed.

"It costs approximately between 20,000 and 30,000 Thai baht a month to feed one elephant," says general manager Vincent Gerards.

With a dozen animals on hand, that's about $7,500-8,000 each month. Prior to the pandemic, most of that money came from the many visitors that would pay to experience the sanctuary and observe the elephants for a full day.

"Around 85% of the population of Phuket relies on tourism in some form or another, whether they're working in hotels or taxi drivers, fisherman -- it's all connected and we're very dependent on international tourists," says Gerards.

"So Covid obviously had a huge impact when we talk about elephant tourism in particular. More than 150 elephants living in Phuket have left the island since the beginning of Covid-19 because the camps had to temporarily or permanently close, and those elephants were then moved back to their owners who often live in other provinces."

Government launches reopening plan
Thailand has fared incredibly well compared to other countries, reporting just over 30,000 cases and 95 deaths since the start of the pandemic. It shut its borders to international travelers in late March 2020 as Covid-19 began to spread, imposing strict quarantine measures on those who did arrive.

Most residents affected by the absence of tourists CNN spoke with say they are pinning their hopes on a new plan that would allow vaccinated international travelers visiting Phuket to skip the 7- to 14-day quarantine measures now in place.

"We hope for vaccines," says restaurant manager Sutam. "If vaccine is okay we hope customers will come back."

According to the Tourism Authority of Thailand (TAT), the approved plan will take effect on July 1.

"Phuket will be the first destination to lift quarantine requirements for vaccinated foreign tourists under the 'Phuket Sandbox' program," says a TAT statement. "However, they will be restricted to travel activities within designated areas in Phuket for seven days and will then be allowed to visit other Thai destinations."

The plan is reliant on efforts to vaccinate 70% of the island's residents, with officials requesting more than 930,000 doses. According to a report in Phuket News, more than 70,000 Phuket residents have received their first dose of the vaccine.