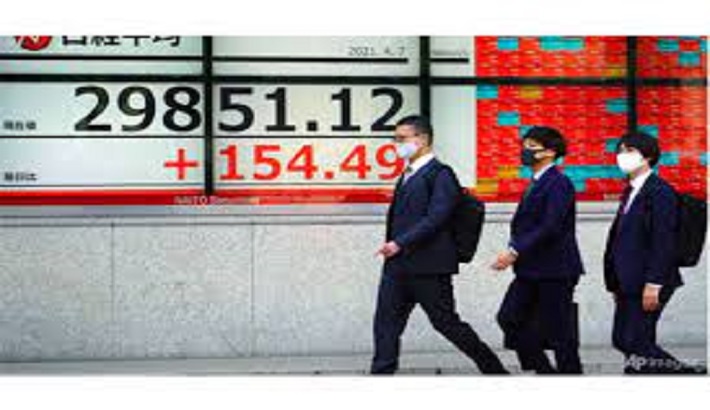 Equities fell in Asia on Monday as investors awaited the next earnings season with high hopes for strong reports and outlooks as the recovery progresses, while the head of the Federal Reserve reiterated his view the economy was improving but warned the virus still posed a risk.

Another record close on the Dow and S&P 500 in New York was not enough of a catalyst to fuel buying in early trade, while a forecast-beating jump in US producer prices acted as a reminder that inflation will likely run hot for a few months.

The general view is that markets have more gains in them as vaccines are rolled out around the world and Joe Biden’s $1.9 trillion stimulus filters through to the economy, while another big spending package is in the works.

Still, Asia started the week on the back foot with Hong Kong losing more than one percent despite a surge of almost eight percent in Alibaba.

The e-commerce giant’s strong advance came despite the firm being hit with a record $2.78 billion fine by China over practices deemed to be an abuse of its dominant market position. Analysts said investors welcomed the end of the probe and the outlay will not likely hurt its operations.

Investors were also taking on the latest comments for Fed boss Jerome Powell, who said in an interview on CBS that the world’s top economy was getting back into gear but he remained cautious.

“The outlook has brightened substantially,” he said. “And that’s the base case. I would say again though, there really are risks out there.

“The principal risk to our economy right now really is that the disease would spread again. It’s going to be smart if people could continue to socially distance and wear masks,” Powell said.

“What we’re seeing now is really an economy that seems to be at an inflection point. And that’s because of widespread vaccination and strong fiscal support, strong monetary policy support,” he added.

Powell and other Fed policymakers have stressed for weeks that the recovery will likely fan inflation but, despite long-running market worries that the bank will be forced to lift interest rates, monetary policy will be kept ultra-loose until the economy is well on the mend.

“The Fed is going to be more concerned about the labour market,” Sian Fenner, at Oxford Economics, told Bloomberg News. “Definitely inflation’s not spiralling out of control.”

Eyes will be on the release of consumer price data this week, after figures Friday showed the producer price index last month came in above forecasts and hit its highest level in almost a decade.

Fears about soaring inflation this year owing to the economic recovery have lifted 10-year Treasury yields — a gauge of future interest rates — to around a one-year high.

Axi strategist Stephen Innes said: “Interest rates will remain the most important topic for some time and will continue to guide the equity market bus and even more around this earnings season.