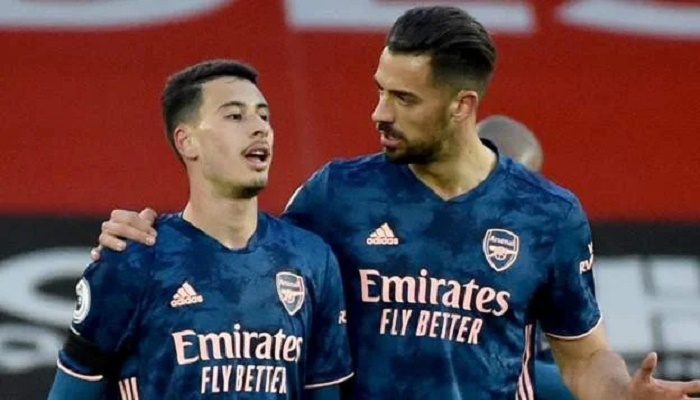 Gabriel Martinelli scored in his first start since January as Arsenal ended a run of four games without a win with victory over the Premier League's bottom club Sheffield United.

The Brazilian has endured an injury-plagued season, but was on hand to net his side's second with a finish into an unguarded goal after Aaron Ramsdale had pushed out Nicolas Pepe's shot.

It came between two Alexandre Lacazette goals - the first a neat first-half finish after Dani Ceballos' back-heel and the second a clinical effort in the closing stages after he was put clear by Thomas Partey.

Sheffield United have won only four games this season and none since Paul Heckingbottom took caretaker charge a month ago and they had little answer to their opponents' increased efficiency.

At 1-0 there was always a chance that this generous Arsenal side may provide the Blades with a way back in, but Martinelli's strike ended such home hopes, with Lacazette adding the final flourish.

The win - complete with a first clean sheet in 15 games - lifts Arsenal above Leeds and Aston Villa and up to ninth in the table, with 45 points.

It did come at a potential cost, though, with Bukayo Saka limping off in the second half with a thigh injury, making him a possible doubt for the second leg of the Europa League last-eight tie with Slavia Prague on Thursday.

Sheffield United remain rooted to the bottom, 18 points from safety with just 21 left to play for. With their woeful goal difference, a loss at Wolves next Saturday will all but confirm their relegation.

Morale-boosting win for Arsenal ahead of big European game

Arsenal endured a chastening eight days in the lead up to this fixture, suffering a humbling 3-0 loss to Liverpool in the Premier League before drawing the home leg of their Europa League quarter-final tie with Slavia Prague.

Their hopes of attaining a Champions League spot via a top-four finish are long gone, leaving success in Europe's secondary competition as their last remaining route back into its more lucrative big brother.

This game, then, was as much about getting Slavia's late equaliser at the Emirates out of their system with a more composed, confidence-boosting win.

It took them a bit of time to warm up to the task, but ultimately they found their stride, with Lacazette's opener coming during a period that saw Aaron Ramsdale tested and the side-netting struck.

Encouragingly, Martinelli, starting only his sixth game of an injury-plagued season, was at the heart of much of their attacking threat.

If he can stay fit for the remainder of the campaign, his excellent close control, direct running and eagerness to test an opposition goalkeeper could well make a big difference to a season currently finely balanced between success and disaster.

His re-appearance as a partner for the in-form Lacazette, who has five goals in his last six games, is timely in the absence of Pierre Emerick-Aubameyang.

Of some concern, though, will be the early departure of Saka from the game, with the talented young winger limping off after a challenge with Rhian Brewster.

The verdict on the Blades' season is already more or less set in stone.

They fleetingly offered the threat of creating something to worry the Gunners but ended with only wayward efforts from David McGoldrick and Brewster to really show for their efforts.

After 31 games that have highlighted that much of their squad is not equipped for the Premier League, the next seven will help them decide which players they want with them in the Championship next season.

Arsenal manager Mikel Arteta to BT Sport: "I am really happy with the way we played, we scored some really nice goals and controlled the game the way we wanted. We played at a high level. From the start I felt the boys were at it, we were efficient.

"Bukayo Saka, the last thing we need is another injury but he felt something in his thigh.

"Gabriel Martinelli twisted his ankle but he's a tough boy. Against Prague, Lacazette missed two big chances and he needed those goals. He has been playing well.

"This is ideal preparation for Thursday. It has been a long run without a clean sheet."

Sheffield United interim boss Paul Heckingbottom to BBC Sport: "We didn't have control without the ball in the first half so we had to make changes.

"We'll keep fighting and pushing to make sure we get more points before the end of the season.

"We have a varied group, some young boys just starting their journey and some older players who have been on a journey with this club over the last five years.

"You have to learn from the tough moments and come back stronger."