Domingo back in business 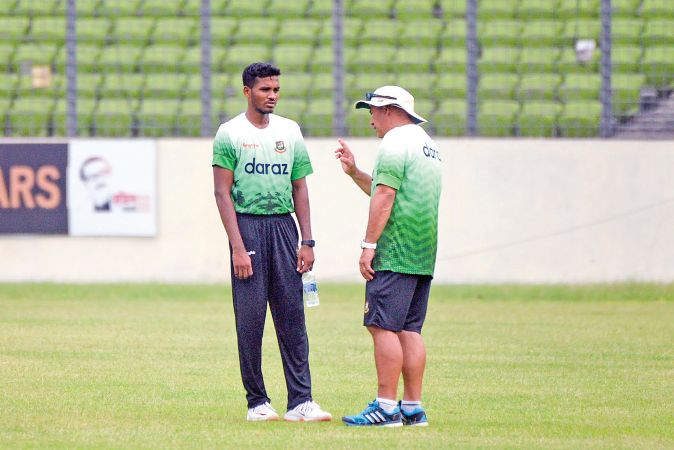 Bangladesh head coach Russell Domingo didn’t take long to get back to business as he decided to hold an impromptu practice session with several youngsters at the Sher-e-Bangla National Stadium on Saturday.

The arrival of Domingo and co at the SBNS in the afternoon was nothing short of a surprise considering the Tigers didn’t plan for any optional practice earlier as some of the members had received their second round of coronavirus vaccine at Kurmitola General Hospital.

National cricketers were given the first dose vaccine on February 18 prior to their tour of New Zealand while the second dose of vaccine was taken by the most members on Saturday who are included in the upcoming Test tour of Sri Lanka.

Mahmudullah and Mushfiqur Rahim are yet to receive their first dose of vaccine.

Bangladesh Cricket Board officials said that those who did not take the second dose vaccine on Saturday will have the opportunity tomorrow (today) as they will leave for Sri Lanka on April 12.

BCB added that they won’t force anyone if he’s not interested to get vaccinated.

Doctors suggest taking rest for a few hours as after vaccination few side effects may occur in the body and as a result, all kinds of practice were eliminated from the schedule.

However, the team management asked whether anyone is interested to go out and spend some time in the nets and mostly the new members of the squad along with few others grabbed the opportunity to make the most out of it.

As a result Domingo also got a chance to see some of the new members of the Test squad from the close quarter as the practice was attended by Shohidul Islam, Shuvagata Hom, Nurul Hasan, Khaled Ahmed, Ebadat Hossain and Yasir Ali. Mushfiqur spent a long time at the indoor as usual.

Domingo spent some time seeing the bowling of Shuvagata, who was picked in the 21-member preliminary squad for the Sri Lanka tour after a gap of five years and tried to know the depth of his bowling skill-set when he bowled against Nurul and Yasir.

Shuvagata’s batting skill was also tested as Ottis Gibson introduced thrower Ramzan against him who continuously bowled short pitch deliveries to the right-hander.

While Domingo looked at his charges, the Tigers’ pace bowling coach Gibson had a long session with pacer Shohidul where he showed him different grips and made him understand the demand of international cricket.

Bangladesh will play a two-day intra-squad warm-up game which is scheduled on April 17-18 at CMC, Katunayake. The first Test will be played from April 21-25 while the second game will be held from April 29-May 3, with both games to be played in Kandy.

The series against Sri Lanka was originally scheduled for July last year but was postponed due to the Covid-19 pandemic. Another attempt was made to play the series in October-November but it didn’t materialise as Bangladesh were not ready to comply with 14-day quarantine in Sri Lanka.