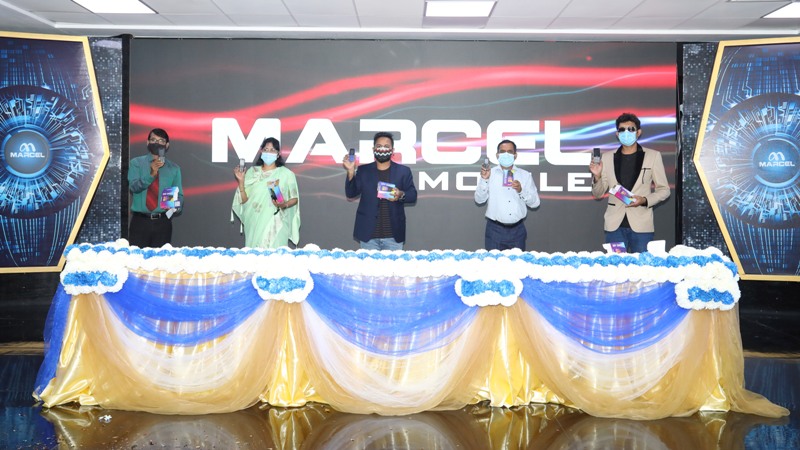 Marcel brand’s higher officials pose for a photograph with Marcel’s feature phones at the launching ceremony held at the company’s corporate office in the capital on Thursday.

Local popular brand Marcel has started its journey in the country’s mobile phone market. Marcel has launched ‘Made in Bangladesh’ tagged feature phones in the domestic market. The brand is set to bring smartphones very soon. Marcel won the hearts of domestic customers with providing various electronics, electrical and home appliance products including refrigerator, TV and AC.

Marcel announced the commencement of its mobile phone marketing activities at a launching ceremony held at the company’s corporate office in the capital on Thursday. Company’s Director S. M. Manjurul Alam greeted the customers and well-wishers of Marcel in a video message on the occasion.

Marcel released three models of feature phones in the market. The phones were manufactured at Marcel’s own factory in Chandra, Gazipur. Models of the newly launched phones are Axino A01, A25 and B50. The phones with different prices and configurations have 16GB microSD card support, digital camera, FM radio with recording facility, full multimedia, internet browsing, Facebook, black list, white list, Bangla key pad, torch light notification and many other necessary features. The phones are available from all Marcel showrooms.

Habibur Rahman Tuhin said that Marcel is producing mobile phones according to the standards of the International Organization for Standardization (ISO). Marcel has its own research and development (R&D) wing in the production of the latest technology mobile phones according to the tastes, preferences and needs of the customers with testing labs and quality control departments. The quality of the cell phones are being strictly ensured. Marcel’s attractively designed and featured smartphones will be released soon in the market.

Managing Director Golam Morshed said Marcel is now the top popular electronics brand in Bangladesh. Marcel has already established its strong position in the market with the trust and love of customers. I expect, Marcel would take the country’s mobile phone market by storm in a short time. Marcel mobile will be at the top of the customers’ choice with the latest technology features and smartphones.

30-day replacement guarantee and 1-year after-sales service are available on Marcel phone. Customer will get post sales services from over 76 service points across the country.