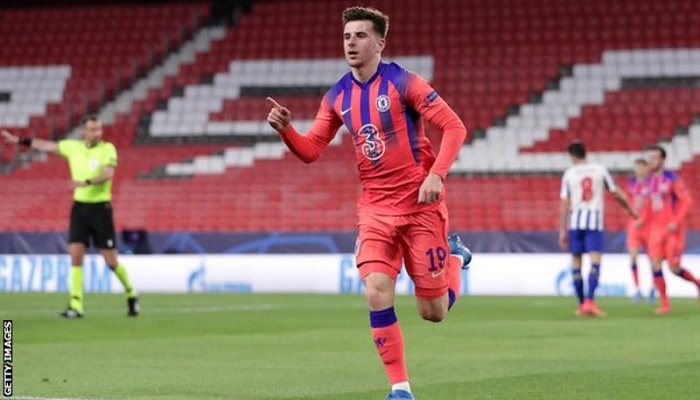 Chelsea bounced back from a testing few days to earn a commanding first-leg quarter-final away win over Porto in the Champions League.

Mason Mount's clever turn and finish in the first half helped bring some welcome relief to Blues manager Thomas Tuchel after his side's heavy defeat to West Brom on Saturday, which was followed by a training ground incident between team-mates Kepa Arrizabalaga and Antonio Rudiger.

Ben Chilwell added a late second after a mistake by Corona, moments after substitute Christian Pulisic had hit the bar.

With both legs of this tie in Spain at Sevilla's Ramon Sanchez Pizjuan Stadium because of coronavirus travel restrictions between Portugal and the UK, this was Porto's 'home' game, meaning Chelsea's two away goals put them in pole position before next Tuesday's second leg.

This was the perfect response by Chelsea after last weekend's embarrassment - a resilient, determined and professional performance against a team that had eliminated Juventus in the previous round.

Tuchel reacted to the West Brom shambles by making five changes, with Rudiger among those recalled despite his 'heated' row with Arrizabalaga.

Rudiger played his part in an impressive Chelsea rearguard display, Porto carving out several chances without managing to find a way through.

Mendy used his legs to keep out Moussa Marega while Luis Diaz, who scored against Manchester City in the group stage, went close from outside the penalty area.

At the other end, Timo Werner and Azpilicueta missed headed chances to extend the lead after Mount scored before Chilwell's crucial second - a composed finish after bursting into the penalty area and taking it past the keeper - gave his side a handsome win.

Mount continues to flourish, his goal the highlight in what was for long spells a closely-fought contest.

Having received a pass from Jorginho following a patient build-up, the midfielder turned sharply and beat Agustin Marchesin with an instinctive low finish from an angle.

Mount has scored more goals in all competitions than any other Chelsea player since Tuchel was appointed in January.

In 2020-21, he has found the net for club and country in the Premier League, Nations League, FA Cup, World Cup qualifying and now Champions League.

Having dropped out of the top four, Chelsea will hope this result can propel them to a strong finish to the season.

The winners of this tie face Real Madrid or Liverpool in the semi-finals - Real lead 3-1 after the first leg - and the Blues also have an FA Cup semi-final against Manchester City on 17 April.