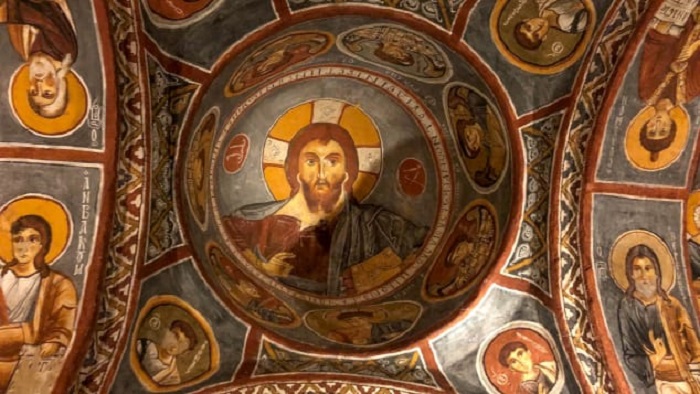 It's a landscape that looks almost alien. Soft tufa rock -- spewed from volcanoes millennia ago to create a series of ethereal "fairy chimneys" that have been shaped and sculpted by nature. This is Cappadocia.

Rising above the Anatolian Plains of central Turkey, this historic region is designated as a UNESCO World Heritage Site, drawing in thousands of tourists every year. Many take to the skies in hot air balloons as the sun rises, all the better to get a view of the rock formations whimsically referred to as "fairy chimneys" that come in all shapes and sizes -- cone ones, pointy ones, even some suggestive ones.

Nature may have created this landscape, but it was ancient civilizations that turned and adapted it to their own purpose. Local people have worked hard to preserve this history and the traditional cultures which have grown in its wake. And nowhere is this more obvious than deep beneath those towering limestone peaks.

The soft rock here, with its winding cave systems and series of natural caverns, meant Cappadocia became renowned for its underground cities in medieval times. When marauding armies arrived here, thousands of people would escape and survive below ground, sometimes for months on end.

Spanning 18 floors to a depth of 85 meters, Derinkuyu is one of the largest and deepest subterranean cities in Turkey.
Omer Tosun is a local antiques collector and the owner of Cappadocia's first luxury hotel. He's made it his business to introduce fascinated visitors to every facet of Cappadocian culture, especially Derinkuyu.

"Picture this," he says standing in what was once an underground stable. "People are farming outside and then when an army attacks these people take all of their animals and come inside."

Omer explains that as many as 20,000 people would have hidden in these narrow passages for months at a time when Mongol forces roamed overhead. They would have made use of hundreds of store rooms, living spaces and even communication tunnels through which they could shout messages and relay news of what was happening above ground.

Today, Omer runs the Museum Hotel. Painstakingly restored over two decades, this opulent property is home to 60 caves and 10 incredible buildings, some dating back a thousand years. Omer's work to bring the ruins back to life means that tourists can now stay in this historic spot, tucked below Uçhisar Castle, the highest point in Cappadocia.