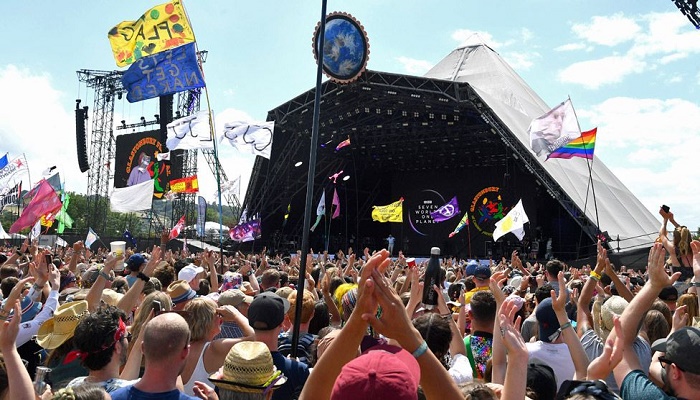 A total of 2,700 English culture and heritage venues will share the latest round of the Culture Recovery Fund.

Canterbury Cathedral has the biggest grant with £2m, while the Serpentine Galleries in London has been awarded £1.9m and Camden Roundhouse has £1.5m.

West End chain Nimax Theatres and Glastonbury will receive £900,000 each.

Festival organisers Emily and Michael Eavis said the money would "make a huge difference in helping to secure our future". Emily told told BBC Radio 4's Today programme on Thursday that the event had "suffered huge losses" in the past year.

Boomtown Fair festival in Hampshire will get £990,000, while almost 100 independent cinemas will share a total of £6.5m.

Theatres in Eastbourne will get £1.9m and the parent company of the Ambassador Theatre Group, which runs more than 30 UK venues, will receive almost £1m.

York Archaeological Trust, which runs attractions including the Jorvik Viking Centre is one of the major recipients with a £1.9m grant. Meanwhile, museums at Bletchley Park in Buckinghamshire and Ironbridge Gorge in Shropshire will receive more than £1m each.

The funding includes £81m in loans including £23m to English Heritage and £7.3m to The Lowry Centre in Salford.

This is the last major tranche of money to be awarded from the £1.57bn Culture Recovery Fund that was announced last July.

In his Budget in March, Chancellor Rishi Sunak announced a further £300m for the fund, which is yet to be allocated.

Culture Secretary Oliver Dowden said the fund had helped culture and heritage organisations "survive the biggest crisis they've ever faced" and was now helping them "plan for reopening and thrive in the better times ahead".