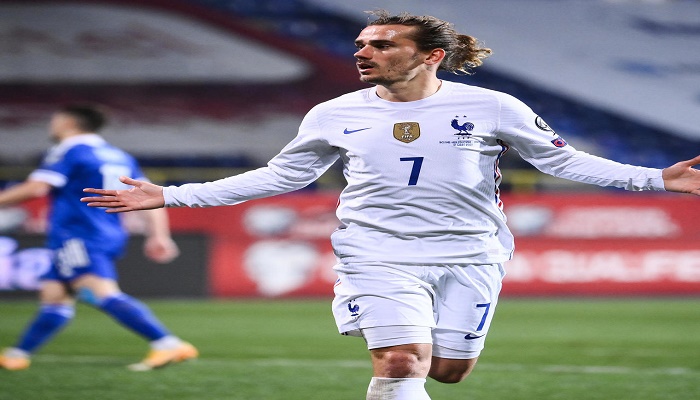 Antoine Griezmann scored the only goal of the game in the second half as reigning world champions France ground out a 1-0 victory over Bosnia and Herzegovina in World Cup qualifying on Wednesday.

Griezmann headed in Adrien Rabiot's cross on the hour in Sarajevo to give the holders their second away win in four days following their 2-0 success in Kazakhstan at the weekend.

After being held 1-1 at home by Ukraine in their opening game on the road to the 2022 World Cup in Qatar, France are now in a strong position at the top of qualifying Group D.

They sit on seven points, four points ahead of Ukraine who were held 1-1 by Kazakhstan in Kiev, and five clear of Finland who have a game in hand.

However, captain Hugo Lloris admitted they did not play well.

"It was a bit laborious, especially in the first half," Lloris, who matched Thierry Henry's tally of 123 caps, told broadcaster M6.

"We played badly but we won thanks to the spirit of the team. That is something we can rely on, it is not the first time, but we need to move on and improve because we have important games coming up in June and July."

The qualifying campaign restarts in September when France are due to host Bosnia, but now their attention can turn to the delayed Euro 2020.

Coach Didier Deschamps will hope his team looks sharper by the time that tournament comes around, with Les Bleus in a group with Germany, Portugal and Hungary.

France looked laboured for long spells against a Bosnia side ranked 56th in the world, just as they had done against Ukraine before a much-changed team saw off Kazakhstan.

Deschamps made seven changes from the last match, with Griezmann, Paul Pogba and Thomas Lemar the only outfield players to keep their places alongside Lloris.

The Tottenham Hotspur goalkeeper is now level with Henry in second place on the list of France's all-time appearance makers.

Only Lilian Thuram, another 1998 World Cup winner who won 142 caps, remains ahead of the 34-year-old Lloris.

Lloris marked the occasion by making one superb first-half save, diving low to his left to scoop away a header by Malmo defender Anel Ahmedhodzic from a Miralem Pjanic corner.

Bosnia competed well despite coming into the game on a run of 10 matches without victory and their Bulgarian coach Ivaylo Petev testing positive for Covid-19 ahead of this encounter.

However, they struggled to create chances for veteran captain Edin Dzeko and were undone by Griezmann in the second half.

Kylian Mbappe played a corner short and Lemar worked the ball to Rabiot whose cross from the left was met by the unmarked Griezmann to score with a superb near-post header.

It was his 35th international goal on his 89th cap, and his second of this campaign after he netted the opener against Ukraine.

"It was complicated. There are moments in every game where it might not be great to watch but the most important thing is to get the three points," said Griezmann.