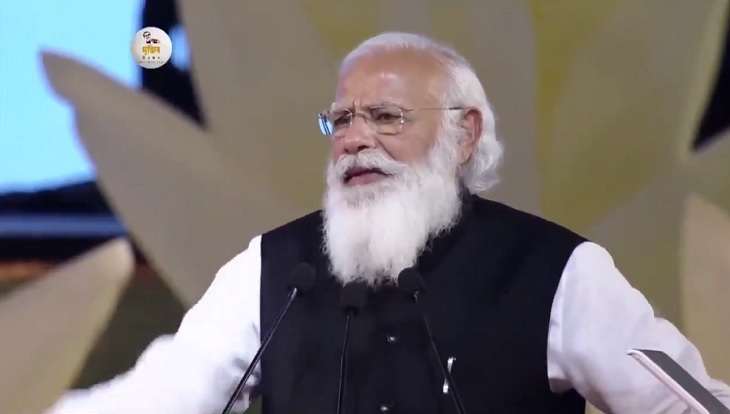 The speech is as follows...

The President of Bangladesh, Abdul Hamid,

The love that all of you have shown me today, makes this one of the most precious moments of my life.

I am pleased that you have included me in the celebrations of this important milestone in the development journey of Bangladesh.

Today is not only the National day of Bangladesh, it is also the 50th anniversary of it’s independence.

And it is this year that we complete 50 years of India-Bangladesh friendship.

This birth centenary year of Jatir Pita, (the Father of the Nation), Bangabandhu Sheikh Mujibur Rahman is further strengthening the relations between our two      countries.

I would like to express my deepest gratitude to their Excellencies, President Abdul Hamid, Prime Minister Sheikh Hasina and to the citizens of Bangladesh.

You have invited India with a great deal of affection, to be a part of these proud moments, this celebration.

On behalf of all Indians, I extend my warmest greetings, to all of you, and to all the citizens of Bangladesh.

I pay tribute to Bangabandhu Sheikh Mujibur Rahman, who dedicated his whole life for Bangladesh and its people. For us Indians, it is a matter of pride, that we had the opportunity to honour Respected Sheikh Mujibur, with the Gandhi Peace Prize.

Today, I remember the hundreds of thousands of sons and daughters of Bangladesh who suffered countless atrocities, who shed their blood, and put their lives at stake for their nation, their language, their culture.

Today, I remember the shurbeer of the Muktijudho, (Liberation war).

Today I also bow to those brave soldiers of the Indian army who stood shoulder to shoulder with their brothers and sisters from Bangladesh in the Liberation War.

Those who shed their blood in the Muktijudho, sacrificed their lives, and played a very big role in making the dream of an independent Bangladesh come true.

Field Marshal Sam Manekshaw, General Aurora, General Jacob, Lance Naik Albert Ekka, Group Captain Chandan Singh, Captain Mohan Narayan Rao Samant, there are so many brave men, such as these, whose stories of leadership and courage continue to inspire us even  today.

The Government of Bangladesh has dedicated a war memorial to honour the memory of these brave martyrs in Ashuganj. I express my gratitude to you for that.

I am pleased that many Indian soldiers who were part of the Liberation war are also here with us today at this special event.

I would also like to share with my brothers and sisters in Bangladesh, and the youth here, one other thing, and I say this with a lot of pride.

The struggle for the liberation of Bangladesh was also one of the first movements that I took part in.

I must have been 20-22 years old, when along with many of my friends, I did satyagraha, (a form of passive resistance), for the liberation of the people of Bangladesh.

As part of my efforts to support the liberation of Bangladesh, I also courted arrest and had a taste of life in prison. That is to say, there was as much of a longing for Bangladesh’s freedom in India, as there was in Bangladesh.

The images of the heinous crimes and atrocities committed by the Pakistani army deeply disturbed us and gave us countless sleepless nights!

Those who gave Bangladesh it’s freedom by shedding oceans of

We will not forget them,

We will not forget them.

A tyrannical Government was massacring its own citizens.

It was crushing their language, their voice, their identity.

The world did not talk as much about the cruelty, oppression and atrocities of ‘Operation Searchlight’ as it should have.

In the midst of all this, a ray of hope for the people here, and for us Indians, was Bangabandhu Mujibur Rahman.

Bangabandhu’s courage, his leadership, ensured that no power could keep Bangladesh under subjugation. Bangabandhu announced,

Under his leadership, common people, the farmers, the youth, teachers, workers all came together to form the Mukti Bahini, or the Liberation army.

Therefore, this occasion,  of the Mujib year, is also a day to remember his vision, his ideals and his courage.

This is also a time to remember, once again, the “eternal  rebel”,  and  the spirit of the Liberation war,

There was widespread support for the freedom struggle of Bangladesh from every corner of India and from all Parties. The efforts and the important role of the then Prime Minister, Smt Indira Gandhi is known to all. At that same time on 6 December 1971, Atal Bihari Vajpayee said, “we are not only fighting along with those who are sacrificing their lives in the freedom struggle, we are also trying to give a new direction to history. Today, the blood of those in Bangladesh who are fighting for their own freedom, and that of Indian soldiers, is flowing together. This blood will create such relations that will withstand all pressures and intrigues.”

Our former President, Pranab Mukherjee ji had called Bangabandhu a “tireless statesman". He had said that Sheikh Mujibur Rahman’s life was a symbol of patience, commitment and self- control.

It is a happy coincidence that the 50th anniversary of Bangladesh’s liberation and the milestone of the 75th year of India’s independence have arrived together.

For both of our countries, in the 21st Century, our journey over the next 25 years, will be very important.

We must remember that though we have similar possibilities in the area of trade and development, we also face similar threats, such as terrorism.

The ideologies and forces behind these inhuman acts are active even today. We not only need to be alert, but also need to stay united to fight them.

Both our countries have the power of democracy; we have a clear vision for moving forward.

India and Bangladesh moving forward together, is equally important for the development of the entire region.

Today, the governments of both India and Bangladesh, are understanding this sensitivity, and making meaningful efforts in this direction. We have demonstrated that with mutual trust and cooperation, solutions can be found for all issues.

Our Land Boundary Agreement also bears testimony to this.

We have worked together to create the SAARC Covid Fund, and coordinated training for our human resources.

India is very pleased that Made in India vaccines have been helpful for our brothers and sisters in Bangladesh.

I remember the images, when this year on the 26th January, on the occasion of India’s Republic day, the Tri-Service Contingent of the Bangladesh Armed Forces marched to the tune of Shuno ekti Mujibur theke (a popular wartime song that hails Sheikh Mujibur Rahman).

The future of India and Bangladesh, is just waiting for countless such moments full of goodwill, and of mutual trust.

In order to strengthen India-Bangladesh relations, it is equally important to have a better connect between the youth of both countries.

On the occasion of the 50th anniversary of India-Bangladesh relations, I would like to invite 50 young entrepreneurs from Bangladesh to India.

They should come to India, connect with our start up and innovation ecosystems, meet our venture capitalists.

We too will learn from them, and they too will get an opportunity to learn.

Along with this, I am also announcing, Subarno Jayanti scholarships for the youth of Bangladesh.

“Bangladesh will definitely become independent. There is no power on earth which can keep Bangladesh under subjugation”.

This declaration by Bangabandhu was not only a warning to those who opposed the existence of Bangladesh, it was also an expression of faith in the capabilities of Bangladesh.

I am pleased that under Sheikh Hasina’s able leadership, Bangladesh is showing its dynamism to the world.

We are inspired by the common legacy of Kazi Nazrul Islam and Gurudev Rabindranath Tagore.

We have no time to lose, we must move forward for change, and we cannot delay any further.

What he said holds true for India and Bangladesh equally.

For our millions of people,

Our goals are common; therefore, our efforts should also be united.

I am confident that India and Bangladesh will together progress at a fast pace.

Once again, I thank you all very much.

I conclude my speech with these good wishes. Jay Bangla! Jay Hind!