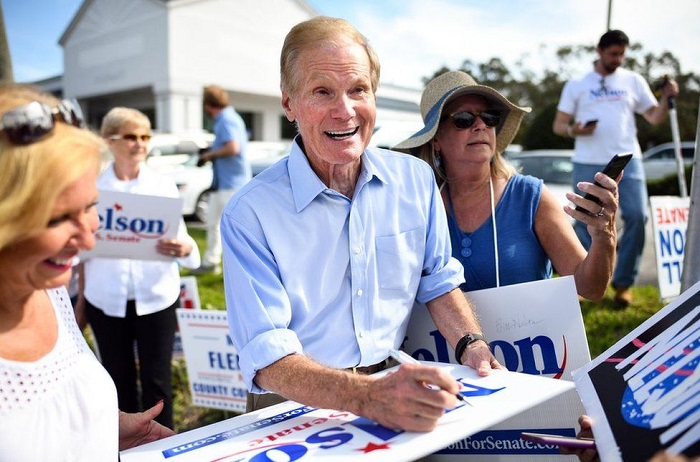 Bill Nelson, a former astronaut and US senator, has been nominated to be the next head of Nasa.

The 78-year-old is seen as a moderate Democrat, and his nomination by President Joe Biden on Friday drew bipartisan praise.

He will need to be confirmed in the Senate before he can take up the role.

Mr Nelson said he was "honoured" to be picked to lead the US space agency, adding that he would "help lead Nasa into an exciting future".

In a statement, the White House said he was "known as the go-to senator for our nation's space programme" for many years. "Almost every piece of space and science law has had his imprint," it said.

The Republican Senator from Florida, Marco Rubio, said: "I cannot think of anyone better to lead Nasa."

In a statement, Mr Nelson said Nasa's workforce "radiates optimism, ingenuity and a can-do spirit." He added: "The Nasa team continues to achieve the seemingly impossible as we venture into the cosmos."

Mr Nelson was a driving force behind Nasa's Space Launch System (SLS) rocket, which was conceived in the wake of an Obama-era overhaul of the US space programme.

He will succeed Jim Bridenstine, who led the agency for almost three years under the Trump administration.

Mr Bridenstine earned widespread praise for his efforts to promote Nasa programmes - in particular, its Artemis venture, which will see astronauts return to the Moon in the 2020s before mounting a mission to Mars.

"Bill Nelson is an excellent pick for Nasa Administrator," Mr Bridenstine said, adding that the former Florida senator had the "political clout" to collaborate with different government offices as well as members of Congress.

"He has the diplomatic skills to lead an international coalition sustainably to the Moon and on to Mars," he said. "The Senate should confirm Bill Nelson without delay."

Mr Nelson was among those who initially criticised Mr Bridenstine's confirmation in 2018, saying: "The administrator must be a leader who has the ability to bring us together... on a shared vision for future space exploration."

The Oklahoma senator had no formal qualifications in science and engineering, and there were concerns he would politicise the non-partisan agency.

It is notable that, following Mr Bridenstine's successful tenure at Nasa, the Biden administration has opted to appoint another politician as the agency's head - albeit a former astronaut with a long history of working on space issues.

After his election to the House of Representatives in 1978, he became the second sitting member of Congress to travel into space when he flew as a payload specialist aboard the space shuttle Columbia in 1986.

After he won election to the Senate in Florida in 2000, Mr Nelson continued to be closely involved in formulating space policy.

In 2010, he said he believed President Barack Obama had "made a mistake" by cancelling the Constellation programme. That programme was former President George W Bush's effort to return astronauts to the Moon.

The decision to axe Constellation - which, at the time, was over budget and behind schedule - sparked a backlash in Congress, not least because it jeopardised thousands of space jobs in southern states.

Along with a Republican Senator for Texas, Kay Bailey Hutchison, Mr Nelson insisted that Nasa be mandated to build a new heavy-lift rocket in the agency's 2010 Authorization Act.

The SLS gave Nasa the capability to launch its Orion crew vehicle to the Moon and other deep space destinations, while securing a base of engineering expertise across the south.

But the programme was criticised by those who believed the agency should move to launching spacecraft entirely on commercial rockets, like those built by Elon Musk's company SpaceX.

Mr Nelson lost his last re-election bid and his Senate term ended in 2019.

In a statement, the acting Nasa administrator Steve Jurczyk, said: "Bill has a proven history of supporting our work here at Nasa, and has helped advance America's position in human exploration, science, aeronautics, and technology."