Pak General asks New Delhi, Islamabad to ‘bury the past and move forward’ 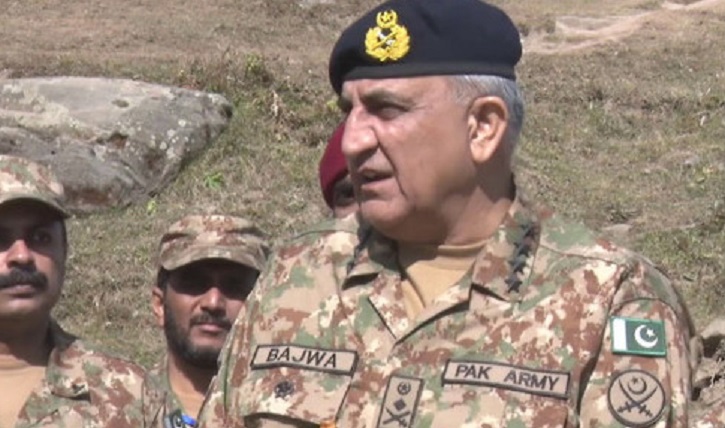 Pakistan’s Chief of Army Staff General Qamar Javed Bajwa on Thursday said it was time for New Delhi and Islamabad to “bury the past and move forward”.

Bajwa was speaking at the Islamabad Security Dialogue when he said that stable Indo-Pak relations were the key to unlocking the potential of South and Central Asia by ensuring connectivity between East and West Asia.

“The Kashmir issue is obviously at the heart of disputes. It is important to understand that without the resolution of Kashmir dispute through peaceful means, [the] process of sub-continental rapprochement will always remain susceptible to derailment due to politically motivated bellicosity,” Bajwa said.

He added, “Our neighbour will have to create a conducive environment, particularly in occupied Kashmir.”

Last month, India said that it desires normal neighbourly relations with Pakistan in an environment free of terror, hostility and violence.

Bajwa’s comments came a day after Pakistan Prime Minister Imran Khan had said that Pakistan was trying to bring in peace, but India would have to take the first step to normalize ties.

Khan had said that having a direct route to the Central Asian region will economically benefit India.

Drawing references from the Cold War, General Bajwa said frayed relations between various powers centres will ultimately lead to another Cold War and that it is these unsettled issues in South Asia that are dragging the entire region back into poverty and underdevelopment.

“It is sad to know that even today it [South Asia] is amongst the least integrated regions of the world in terms of trade, infrastructure, water and energy cooperation,” he added.

Bajwa also talked about poverty which he said was linked with the regional tension that had hindered the regional connectivity and integration.

“Despite being impoverished, we end up spending a lot of our money on defence, which naturally comes at the expense of human development,” he said.

However, he added that Pakistan was resisting the temptation to become part of the arms race or increase defence budget despite rising security challenges.

Ties between India and Pakistan took a hit after a terror attack on India’s Pathankot Air Force base in 2016 by terror groups based in Pakistan.

Subsequent attacks, including one on Indian Army camp in Uri, further deteriorated the relationship. The relationship dipped further after India’s war planes pounded a Jaish-e-Mohammed terrorist training camp deep inside Pakistan on February 26, 2019, in response to the Pulwama terror attack in which 40 CRPF jawans were killed.