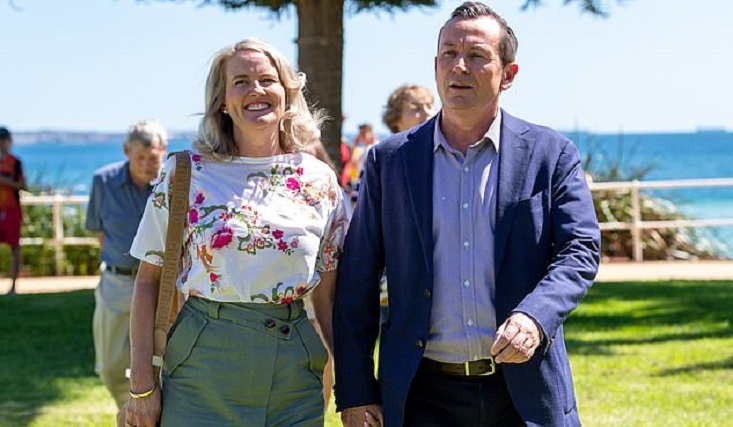 West Australian Premier Mark McGowan and his wife Sarah walk to a press conference in Rockingham, 50km south of Perth, on Sunday. The WA Labor party won the state election by a landslide on Saturday

Chinese hackers are suspected of breaking their way into Western Australia's parliamentary email network as part of a global cyber-attack.

The online attack, which involved Microsoft software, was detected in the middle of the state election campaign on March 4.

A warning text from the Department of Parliamentary Services was sent to WA politicians in the wake of the email hacking, ABC reported.

'Please be advised that the Parliament mail server has been hit with a cyber-attack,' the text read.

'Consequently, the mail server will be down until further notice.'

Western Australia's Parliamentary Services Department conducted an investigation and found that no sensitive data was taken.

WA's Executive Manager of Parliamentary Services Rob Hunter said the email server was immediately disconnected once they were made aware of the attack.

'The situation was resolved by the following morning … and a forensic audit found there was no data breach,' he said.

The following week, a number of large Australian organisations using the popular Microsoft Exchange were warned they are exposed to cyber attacks because they have not patched their systems.

The ACSC has identified a large number of Australian organisations yet to patch affected versions of Microsoft Exchange, leaving them exposed to cyber compromise,' Mr Hastie said.

'This can be done by implementing the necessary network security patches as soon as possible and then following the detection steps outlined by Microsoft.'

He said if organisations were unable to quickly deploy the patches, they should consider preventing internet access to the exchange web server.

It comes after China was in June last year blamed for a huge cyber-attack on Australia amid an escalating feud between the two nations.

Mr Morrison did not name the country, but government sources say there is a 'high degree of confidence that China is behind the attacks'.

Beijing and Canberra were at loggerheads after Australia led global calls for an inquiry into the origins of Covid, which first surfaced in China at the end of 2019.

Former foreign minister Julie Bishop has warned the Australian government to lay off 'tit-for-tat' with Beijing, saying the country could remain 'in the Chinese freezer' for years.

Ms Bishop said the government needed to ensure they don't offend our 'largest customer' while hosting an online panel for the Australian National University on Monday night.

She said she understood Beijing officials were refusing to meet with Canberra ministers to discuss levy's imposed by China on Australia, suggesting it would take years for the relationship to mend.

The remarks were made hours after trade minister Dan Tehan announced he had escalated a complaint to the World Trade Organisation about tariffs on Australian barley, which has increased the cost by 80 per cent.

'The infamous Chinese freezer can last for years,' said Ms Bishop, who is now the Chancellor of the ANU.

'You don't unnecessarily offend your largest customer, so we need to re-engage with China.'

How China's feud with Australia has escalated

2019: Australian intelligence services conclude that China was responsible for a cyber-attack on Australia's parliament and three largest political parties in the run-up to a May election.

April 2020: Australian PM Scott Morrison begins canvassing his fellow world leaders for an inquiry into the origins of the coronavirus pandemic. Britain and France are initially reluctant but more than 100 countries eventually back an investigation.

April 15: Morrison is one of the few leaders to voice sympathy with Donald Trump's criticisms of the World Health Organization, which the US president accuses of bias towards China.

April 21: China's embassy accuses Australian foreign minister Peter Dutton of 'ignorance and bigotry' and 'parroting what those Americans have asserted' after he called for China to be more transparent about the outbreak.

April 23: Australia's agriculture minister David Littleproud calls for G20 nations to campaign against the 'wet markets' which are common in China and linked to the earliest coronavirus cases.

April 26: Chinese ambassador Cheng Jingye hints at a boycott of Australian wine and beef and says tourists and students might avoid Australia 'while it's not so friendly to China'. Canberra dismisses the threat and warns Beijing against 'economic coercion'.

May 11: China suspends beef imports from four of Australia's largest meat processors. These account for more than a third of Australia's $1.1billion beef exports to China.

May 18: The World Health Organization backs a partial investigation into the pandemic, but China says it is a 'joke' for Australia to claim credit. The same day, China imposes an 80 per cent tariff on Australian barley. Australia says it may challenge this at the WTO.

May 21: China announces new rules for iron ore imports which could allow Australian imports - usually worth $41billion per year - to be singled out for extra bureaucratic checks.

June 5: Beijing warns tourists against travelling to Australia, alleging racism and violence against the Chinese in connection with Covid-19.

June 19: Australia says it is under cyber-attack from a foreign state which government sources say is believed to be China. The attack has been targeting industry, schools, hospitals and government officials, Morrison says.

July 9: Australia suspends extradition treaty with Hong Kong and offers to extend the visas of 10,000 Hong Kongers who are already in Australia over China's national security law which effectively bans protest.

August 18: China launches 12-month anti-dumping investigation into wines imported from Australia in a major threat to the $6billion industry.

August 26: Prime Minster Scott Morrison announces he will legislate to stop states and territories signing deals with foreign powers that go against Australia's foreign policy. Analysts said it is aimed at China.

November 3: Barley, sugar, red wine, logs, coal, lobster and copper imports from Australia unofficially banned under a directive from the government, according to reports.

November 27: Australian coal exports to China have dropped 96 per cent in the first three weeks of November as 82 ships laden with 8.8million tonnes of coal are left floating off Chinese ports where they have been denied entry.

November 28: Beijing imposed a 212 per cent tariff on Australia's $1.2 billion wine exports, claiming they were being 'dumped' or sold at below-cost. The claim is denied by both Australia and Chinese importers.

December 12: Australian coal is added to a Chinese blacklist.

December 24: China suspends imports of Australian timber from NSW and WA after local customs officers say they found pests in the cargo.

February 5, 2021: China confirms Melbourne journalist and single mother Cheng Lei has been formally arrested after being detained in August, 2020.

February 23, 2021: China accuses Australia of being in an 'axis of white supremacy' with the UK, USA, Canada and NZ in an editorial.

March 11, 2021: Australia is accused of genocide by a Communist Party newspaper editor.