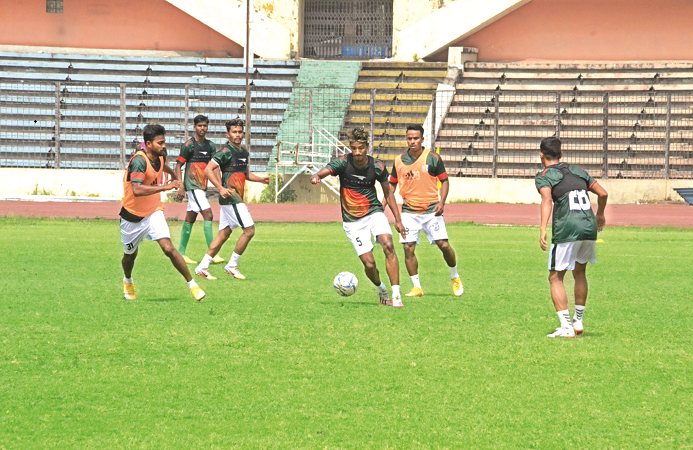 Midfielder Sohel Rana believed that the high altitude and cold in Nepal would be the first opponents for Bangladesh footballers and they need to cope up with the weather as soon as possible before the tournament gets underway.

Bangladesh national football team, which will fly for Nepalese capital Kathmandu today, will play against Kyrgyzstan U-23s and the hosts Nepal in the Tri-Nation Tournament.

However, before taking on these opponents, Bangladesh players have to adjust to the weather of the land of the Himalayas.

Bangladesh U-23s, which bagged a bronze in the 2019 South Asian Games held in Nepal complained of weather as they suffered breathing problems due to the severe cold and high altitude there that time.

Apart from the footballers, four sprinters -- Jahir Rayhan, Abu Taleb, Shabiya al Soha and Sumi Akter -- from the Bangladesh contingent for SA Games suffered respiratory problems due to the weather there.

“Nepal is a hilly country. We know that we have to face breathing issues in the high altitude and cold there. It will be difficult for us to play in such kinds of hostile weather there,” said Sohel, as Bangladesh completed their training at the Bangabandhu National Stadium on Wednesday.

“So we are going the four-day before the tournament. We have to cope up with the weather as soon as possible. If we want to play against them we have to adjust to that weather. If we can do that, we can start this tournament well,” he added.

Sohel put Kyrgyzstan U-23s ahead of his side in terms of physical and technical strategies and pointed out Nepal's advantages of weather and grounds as the hosts.

“They (Kyrgyzstan U-23s) are physically and technically more advanced than us. We have played with them. The national team and U-23s are the same, there are not many differences. On the other hand, Nepal will get advantages of weather and grounds as the hosts,” he said.

“Of course we want to win but we should not be overconfident about winning. Coach is saying his target is the World Cup qualifiers and he will see the new players through the tournament. So, we will play as per his plan and will try to win the cup,” the 25-year-old added.

Bangladesh will play two games against Kyrgyzstan U-23s and hosts Nepal on March 23 and 27 respectively while the final will be held on March 29, all at the Dasharath Stadium in Kathmandu.