Bangabandhu will remain a source of inspiration for many generations to come: Maldivian President 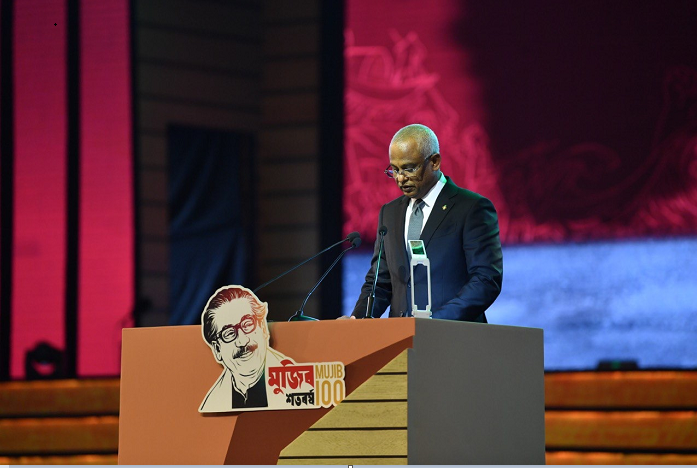 Maldives president Ibrahim Mohamed Solih has stated that Sheikh Mujibur Rahman, Bangladesh's first President, was a symbol of democracy and freedom, whose efforts were instrumental in securing an independent destiny for Bangladesh's people and will remain a source of inspiration for many generations to come.

The President spoke as the guest of honour at the official ceremony held in the National Parade Grounds, Dhaka, to commemorate the 'Birth Centenary of Bangabandhu Sheikh Mujibur Rahman.' Born on March 17, 1920, Sheikh Mujibur Rahman has long been noted as the founder of Bangladesh and is affectionately known as 'Bangabandhu,' or 'friend of Bengal.'

Speaking at the ceremony, President Solih emphasised that throughout his life, Sheikh Mujibur Rahman was a firm advocate of democracy and political liberty and that he advocated those ideals that resonated with people from all walks of life. Despite the tragic circumstances of his death, President Solih noted that Sheikh Mujibur Rahman will always have an honoured place in the hearts of those who yearn for democracy and freedom.

The President also shed light on Bangladesh's extraordinary work in uplifting the lives of its people and developing their nation. He said that the pace of economic development in Bangladesh has been remarkable and that practical policies adhered to by Bangladesh's leadership and the hard work of its people are transforming the country into a fast-growing and strong economy.

President Solih further extended an invitation to the Her Excellency Sheikh Hasina, the Prime Minister of Bangladesh, and His Excellency Md. Abdul Hamid, the President of Bangladesh, to undertake a visit to the Maldives at an opportune time.