Bangladesh Embassy in Beijing celebrates the Birth Centenary of Bangabandhu 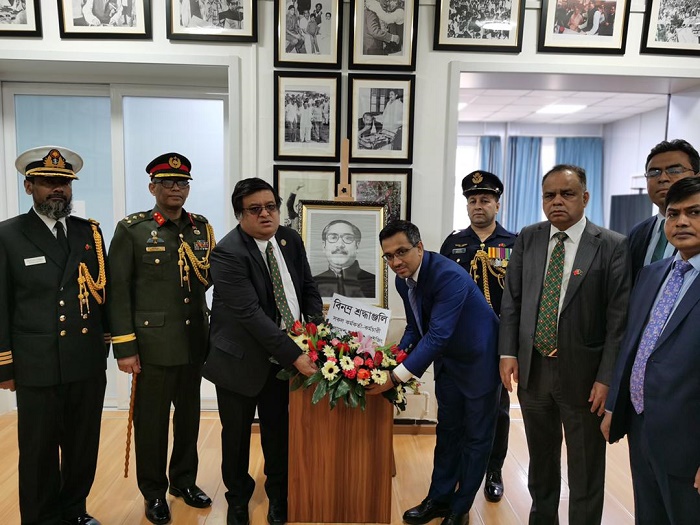 Bangladesh Embassy in Beijing celebrated the Birth Centenary of the Father of the Nation Bangabandhu Sheikh Mujibur Rahman in a befitting manner.

This Day is also being observed as National Children Day. The combination of the Birth Centenary and the Golden Jubilee of the independence, the architect of which is Bangabandhu himself, posited this year's event into a special significance. Bangabandhu visited China in the year 1952 and 1957, which left a long-lasting impression on him, and it is reflected in his sole travel account “the New China in My Eyes”. 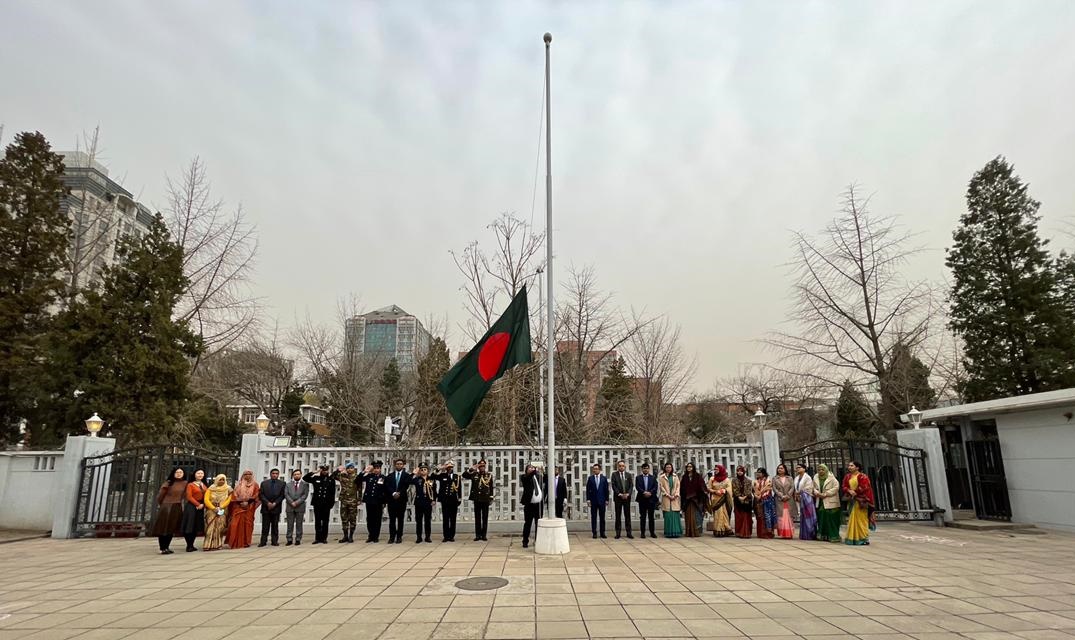 This year the Embassy took an elaborate programme dividing into three segments. The first segment commenced with the hoisting of the flag by Ambassador Mahbub-Uz-Zaman. This followed prayer for the departed soul of Bangabandhu, his family members, for the martyrs of the warand for the progress and prosperity of Bangladesh.

After that, the Ambassador, along with all officers and officials of the Embassy, paid respect to the memory of Bangabandhu by laying a floral wreath at his portraitsituated in the newly constituted Bangabandhu Corner and Library of the Embassy.

Messages from the President and the Prime Minister, Foreign Minister and State Minister of Foreign Affairs of Bangladesh on the occasion were read-out. After that, officers of the Embassy participated in the discussions on Bangabandhu. Ambassador Mahbub-Uz-Zaman in his speech paid glowing tribute to Bangabandhu for his relentless struggle against all forms of discrimination and exploitation.

At the second session, a webinar in commemoration of the Birth Centenary titled “Bangabandhu, A great Visionary: The Architect of Independence and Prosperous Bangladesh” was held. Four guest speakers Chai Xi, the former Ambassador of China to Bangladesh, Ms.Yu Guangyue Anandi, Chief Correspondent of the China Media Group in Bangladesh, Ms. Cao Yanhua Soborna, the Chief of the Bangla department of the China Media Group in Beijing and Professor Zeng Qiong Soma of the Beijing Foreign Studies University delivered their speeches.

All the guest speakers mainly spoke in Bangla but summarised their speeches in Chinese. 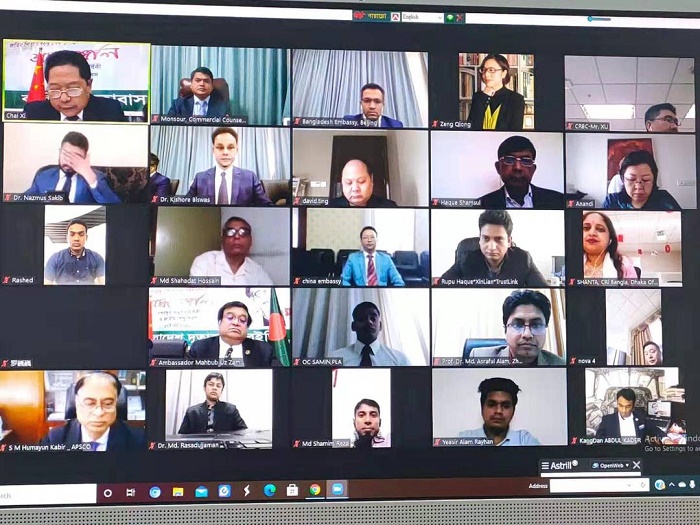 Around 150 quality audience incorporating foreign diplomats, diplomats of the Chinese Embassy in Dhaka, representatives the Chinese Communist Party, Foreign Ministry of Bangladesh, Bangladesh diplomats, representatives of the China Media Group (CMG), Teachers and Students of Beijing Foreign Studies University and other universities in China who are teaching and learning Bangla language, Chinese businessmen and investors, the business community of Bangladesh, Bangladesh community members and others attended the Webinar.

All the guest speakers highlighted the visit of Bangabandhu to China in the year 1952 and 1957 and on his travel account reflected in the book “আমার দেখা নয়া চীন”(The New China in my Eyes).

Ms. Yu GuangyueAnandi, in her speech, elaborated the contributions of Bangabandhu for his country and people and said that Bangabandhu will remain in the golden memory of the people forever. Ms. Cao Yanhua Soborna said that she is in the editorial board of translating “আমারদেখানয়াচীন” into Chinese, and she became emotional at one stage, thinking that Bangabandhu would had become so happy that China has today materialized what he predicted 70 years ago.

Ms. Zeng Qiong Soma, in addition to mentioning that Bangabandhu’s prediction about China has come true today said that with the rapid pace of development, Bangladesh today is also materializing what Bangabandhu wanted his country to be.

Former Chinese Ambassador to Bangladesh Chia Xi, reflecting on the glimpses of the book, said that Bangabandhu has been in the heart of the Chinese people since the 1950s after his visit to China and after meeting Chairman Mao Zedong, senior officials and the people of China.

From his travel account, we can realizehow deeply the emancipation of his people was embedded in his mind. For this reason in heart, he visited factories, schools, markets, shops, cultural sites, farming fields and meet the Chinse people from all the walks of life to understand the country people and the society.

He understood the spirit, aspiration and unity of the Chinese people and took the same for his country. The visit laid a sustained mark in his subsequent leadership for the country.

In his concluding remarks, Ambassador Mahbub-Uz-Zaman highlighted the charismatic leadership of Bangabandhu through which he initiated the movement of emancipation of the people of Bangladesh and materialized the same within his lifetime.

All of them praised the statesman-like quality of Bangabandhu Sheikh Mujibur Rahman and observed how Bangabandhu ignited the passion of the Bengali people to liberate their homeland that has culminated into the liberation of the country. The Webinar was moderated by Dr. M. Nazrul Islam, Minister of the Embassy.

In the third segment of the programme, a drawing competition and a cultural programme were held in the evening in the newly constituted Bangabandhu Sheikh Mujibur Rahman Hall of the Embassy.

As many as 25 Children, both from the community and the Embassy family, participated in the drawing competition segmented into three groups. They were awarded prizes and all of them received a crest.

A cultural programme based on the glorious Independence Day was arranged. In the concluding speech, the Ambassador thanked all for their participation in the events of the 17th March.

He urged the Bangladeshi community in China to sink their differences and to rededicate themselves and work collectively for the betterment, economic welfare and progress of the country.