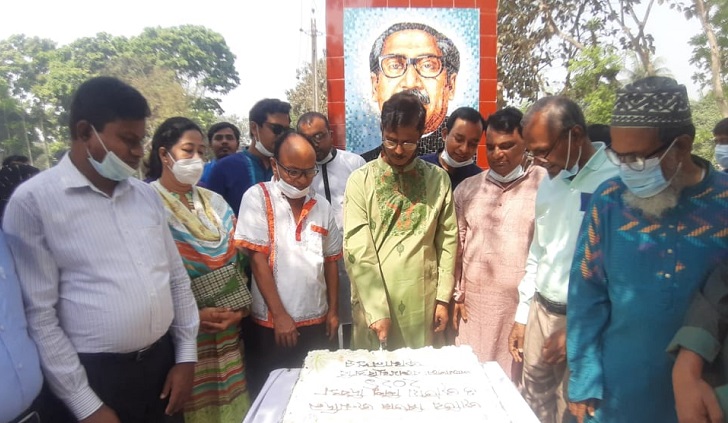 The 101st birth anniversary of Father of the Nation Bangabandhu Sheikh Mujibur Rahman and National Children Day-2021 was observed in Bangamata Sheikh Fojilatunnesa Mujib Science & Technology University (BSFMSTU) at Jamalpur in a befitting manner on Tuesday.

Professor Dr. Syed Samsuddin Ahmed, Vice-Chancellor of the University, along with the Teachers and administrative personalities of the University paid tributes to the Father of Nation recalling his contribution in the independence.

Observing the day, VC placed wreath to the mural of Bangabandhu Sheikh Mujib and Bangamata Sheikh Fojilatunnesa Mujib at the campus while Dean of Science faculty, exams controller Dr Muhammad Anwar Hossain, proctorial body and departmental chairmans including officers' and employees' participated the program among others.

Later, at the discussion, BSFMSTU VC Dr. Syed Samsuddin Ahmed paid glowing tribute to Bangabandhu for his unwavering struggle and charismatic leadership for the independence of Bangladesh and highlighted the spirit and philosophy of Bangabandhu in establishing independent Bangladesh.

He also particularly encouraged the new generation to uphold the spirit of Bangabandhu in order to build through their hard work the "Sonar Bangla"-the dream of Bangabandhu.