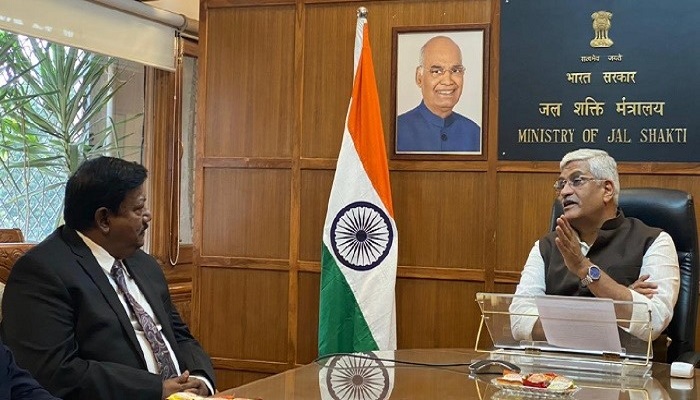 The Water Resources Secretary Level meetings between Bangladesh and India was held in New Delhi on Tuesday.

Kabir Bin Anwar, Senior Secretary of Ministry of Water Resources of Bangladesh, led the Bangladesh side. Indian side was led by Pankaj Kumar, Secretary, Ministry of Jal Shakti of India. Muhammad Imran, High Commissioner of Bangladesh to India also attended the meeting, said a press release issued by Ministry of Foreign Affairs, Bangladesh.

The meeting was held in a cordial atmosphere and good understanding. Both sides held discussions on issues related to excavation of remaining portion of Intake channel (Rahimpurkhal) of the Upper Surma-Kushiyara Project in Bangladesh, pollution in Titas River through C&B khal and Janji River at Akhaura in Bangladesh, reduced flow in the Mohananda River due to withdrawal of water in West Bengal, India, Cooperation between Bangladesh and India in common river basin management, expansion of cooperation between India and Bangladesh on Flood Forecasting and Warning.

Kabir Bin Anwar stressed on signing of interim water sharing agreement of the Teesta river as agreed by both countries in 2011 and also for the betterment of millions of people of both the countries sharing of waters of six trans-boundary rivers viz. Manu, Muhuri, Khowai, Gumti, Dharla and Dudhkumar, conducting feasibility study jointly by India and Bangladesh for optimum utilization of the water received by Bangladesh under the provisions of Ganges Water Sharing Treaty, 1996.

The meeting further discussed about Implementation of the MoU on withdrawal of water from the Feni River for drinking water supply scheme for Sabroom town of Tripura, India and deliberations for firming up draft agreement for sharing of water of Feni river, reduced flow during lean season in rivers, Aatrayee, Atrai, Punarbhaba and Tangon flowing into West Bengal and Pollution in Mathabanga-Churni River in West Bengal, India due to effluents released from sugar mills in Bangladesh.

Later, the Water Resources Senior Secretary of Bangladesh called on Shri Gajendra Singh Shekhawat, Union Minister and Shri Rattan Lal Kataria, Minister of State, Ministry of Jal Shaktiof India and noted sincere collaboration in the water sector for the mutual benefit of both the countries.

The Bangladesh Senior Secretary also expressed hope that the Indian Minister of Jal Shakti would visit Bangladesh soon for the 38th meeting of the JRC at the invitation of the Bangladesh Minister of State for Water Resources preferably in the year 2021 when Bangladesh is celebrating the birth centenary of Father of the Nation Bangabandhu Sheikh Mujibur Rahman, 50th years of Bangladesh’s independence and establishment of diplomatic ties of Bangladesh and India.