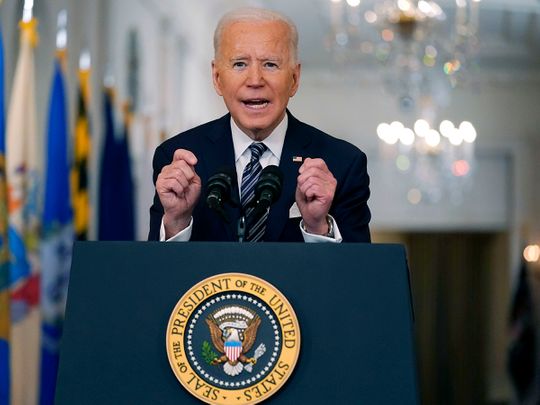 President Joe Biden has said he is hopeful that America can "mark independence" from Covid-19 on 4 July if people get vaccinated.

In his first primetime address as president, Mr Biden said he would order states to make all adults eligible for vaccinations by 1 May.

His speech comes a year to the day the outbreak was classified as a pandemic. Half a million Americans have died.

Last March, all US major sport was cancelled and actor Tom Hanks announced he had caught the virus. Then-President Donald Trump suspended travel from Europe, and also said he hoped the US would be open again for Easter.

In his speech President Biden also eyed an important date in the calendar for when small groups could get together again.

"If we do this together, by 4 July, there is a good chance you, your family and friends can get together in your backyard and celebrate Independence Day," Mr Biden said.

He added that the country would be able to not only celebrate Independence Day but also "independence from this virus".

As part of the plans to expand vaccinations, the number of places where people can be immunised will be increased with veterinarians and dentists among those also allowed to vaccinate people.

Mobile units will travel into local communities to provide vaccinations in underserved communities, the president said.

Mr Biden set a target of 100m vaccinations by his 100th day in office but in his address, he said this target would be reached on day 60.

Despite the good news, he warned that the "fight is far from over". "This is not the time to let up," he added.

He called on people to maintain social distancing measures, hand washing and wear a mask.

"Beating the virus and getting back to normal relies on national unity," he said.

Also on Thursday, the president signed a $1.9tn (£1.4tn) economic relief bill that marks an early legislative victory for his administration.

The bill includes $1,400 payments, an extension of jobless benefits, and a child tax credit that is expected to lift millions out of poverty. The stimulus payments are set to begin this month.

It also allocates $350bn to state and local governments, some $130bn to school reopening, $49bn for expanded Covid-19 testing and research, as well as $14bn for vaccine distribution.

Mr Biden said the relief package will rebuild "the backbone of this country".

The spending bill, one of the largest in US history, passed Congress without a single Republican supporter.

Republicans objected to the bill's price tag, calling for various elements of the package to be smaller. They suggested that stimulus cheques be given only to those who have lost income over the past year.

The pandemic has left more than 529,00 people dead in the US and infected over 29 million.