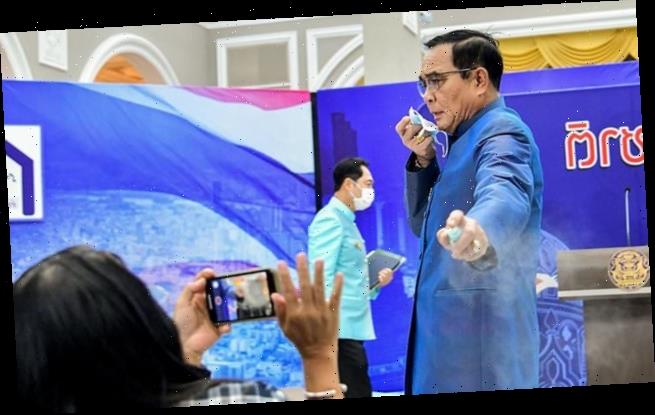 Thailand’s prime minister has pulled another bizarre stunt on the press.

According to Reuters, the incident occurred Tuesday at the end of Prayuth Chan-ocha’s weekly press conference in Bangkok, when he was asked about potential changes to his cabinet. Questions of a shake-up have been swirling since last week, after three his ministers were found guilty of sedition for the roles in the 2013-2014 protests against the former government. Prayuth predictably refused to directly answer the question, and insisted he wasn’t familiar with situation.

“Is there anything else to ask?” he said at a podium. “I don’t know, I haven’t seen it. Isn’t it something the prime minister should know first?”

Moments later, Prayuth walked away from the mic and approached the front row of reporters with a small spray bottle of sanitizer in hand. He proceeded to cover his face with a mask, and then doused the reporters with the disinfectant before walking away.

Prayuth came to power in 2014, after leading a military coup against the former government. He is known to lash out at reporters as well as employ amusing tactics to dodge tricky questions. Reuters reports he “previously fondled a reporter’s ear” and threw a banana peel at a camera crew. In 2018, he appeared in front of the press with a life-size cutout of himself and told journalists to “Ask this guy” before sauntering off stage.