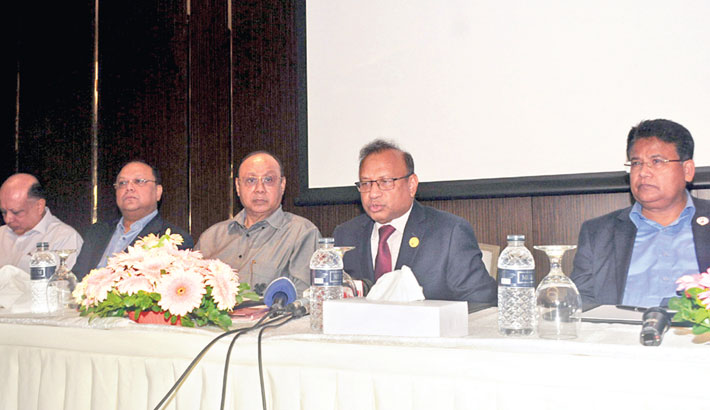 LGRD and Cooperatives Minister Md Tazul Islam speaks at a press conference at a hotel in the capital on Sunday after a meeting with representatives of Bangladesh Land Developers Association (BLDA) and Real Estate and Housing Association of Bangladesh (REHAB). —sun photo

The government has formed a working committee to review the opinions and recommendations of Bangladesh Land Developers Association (BLDA) and Real Estate and Housing Association of Bangladesh (REHAB) for implementation of the Detailed Area Plan (DAP) for the capital.

“A committee, headed by the secretary of the housing and public works ministry, has been formed to assess the opinions and recommendations of the BLDA and the REHAB,” Local Govern-ment, Rural Development and Cooperatives Minister Tazul Islam said on Sunday after a meeting with the representatives of the two bodies.

BLDA and REHAB representative are also the members of the committee, he added.

A press release, quoting Tajul, also convener of the DAP Review Committee, said they are committed to resolving the problem of housing and making Dhaka a habitable city.

“But in the past, many establishments have been built in an unplanned way. We want to implement the DAP (2016-35) to avoid the unplanned development,” Tajul also said.