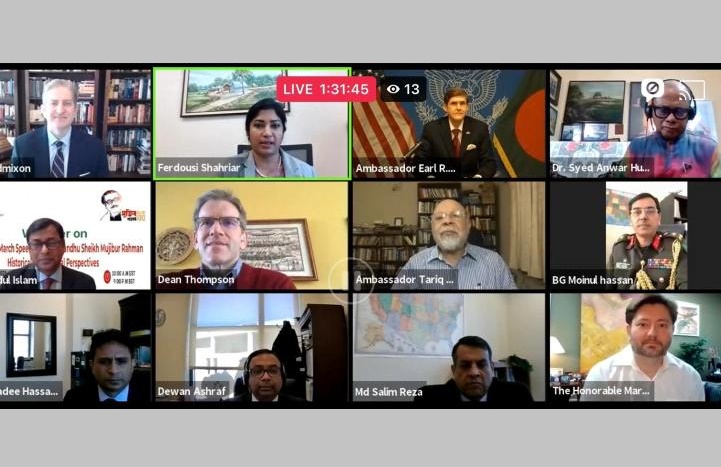 The Embassy of Bangladesh in Washington D.C., with the support of the Bureau of South and Central Asian Affairs of the U.S. State Department, organised a webinar on Sunday to commemorate the historic March 7 speech delivered by the Father of the Nation Bangabandhu Sheikh Mujibur Rahman.

The event was participated by high government leadership, academia, diplomats, think tanks, media, and government officials from Bangladesh and the U.S.

Due to public health restrictions, the discussion was held virtually over the 'Zoom' platform.

After the welcome remarks by Bangladesh Ambassador to the U.S. M Shahidul Islam, Professor Dr. Syed Anwar Husain delivered the keynote address on Bangabandhu's life and ideals attaching a particular focus to the 7th March speech.

Ambassador Tariq A. Karim, South Asia Analyst Seth Oldmixon, and Ambassador of the U.S. to Bangladesh Earl R. Miller were among the panel speakers in the webinar.

Acting Assistant Secretary of Bureau of South and Central Asian Affairs of the U.S. Department of State Dean Thompson attended the webinar as the special guest and State Minister for Foreign Affairs Md. Shahriar Alam was the Chief guest.

In his keynote address, Professor Dr. Syed Anwar Hossain said that the 7th March speech was delivered impromptu as it was an unwritten one.

He added that this was the shortest and at the same time the best speech, delivered in a colloquial language to reach across everyone…”

Ambassador Tariq A. Karim said that Bangabandhu was an extraordinary orator, unparalleled in our living memories. He added that Bangabandhu's 07 March 1971 speech was an impassioned appeal for seeking his people's backing.

Renowned South Asia Analyst Seth Oldmixon said that the history of Bangladesh has parallels with American history as both the countries fought anti-colonial independence movements, and the 7th March speech is a culmination of incredible historical events that led to the independence of Bangladesh.

Ambassador Earl Miller recalled Senator Edward Kennedy's speech on February 14, 1972, at the University of Dhaka, attended by eight thousand jubilant students of Dhaka University. Ambassador Earl Miller quoted Edward Kennedy that the United States’ people were with the people of Bangladesh during the War of Liberation, although the government was not.

Acting Assistant Secretary of Bureau of South and Central Asian Affairs of the U.S. Department of State Dean Thompson said that Sheikh Mujib was a “towering figure of the twentieth century” who shaped modern Bangladesh.

Assistant Secretary Thompson applauded the generosity of Bangladesh in protecting the forcibly displaced Rohingyas and said that the USA is a steadfast partner of Bangladesh in finding a durable solution to the Rohingya crisis.

He added, "one of the areas we are most excited to work on is expanding our economic partnership. Bangladesh offers so many opportunities in diverse areas, from renewable energy, port infrastructure to artificial intelligence."

He expressed confidence that the US-Bangladesh relations will continue to strengthen under the Biden Administration.

State Minister for Foreign Affairs Md. Shahriar Alam paid deep reverence to Bangabandhu Sheikh Mujibur Rahman for his clarion call to the Bengali nation for waging the decisive struggle against the Pakistan occupation force and declaring the Independence of Bangladesh on March 07, 1971, that ultimately led to an independent and sovereign Bangladesh.

He recalled with thanks the role of Ambassador M Shahidul Islam at the UNESCO in attaining the recognition to and listing of the historic 7th March speech in the Memory of the World Register.

The State Minister said, “7 March will ever remain a treasured part of Bangladesh's history. It will always remind us of an inspiring, powerful, and glorious tale of the fight of an unarmed nation for its sovereign existence for generations to come."

The webinar ended with the concluding remarks by the Ambassador of Bangladesh to the USA M Shahidul Islam.

Earlier in the morning, Ambassador Shahidul Islam formally hoisted the national flag of Bangladesh in the Chancery premises and placed a floral wreath at the bust of the Father of the Nation, Bangabandhu Sheikh Mujibur Rahman.