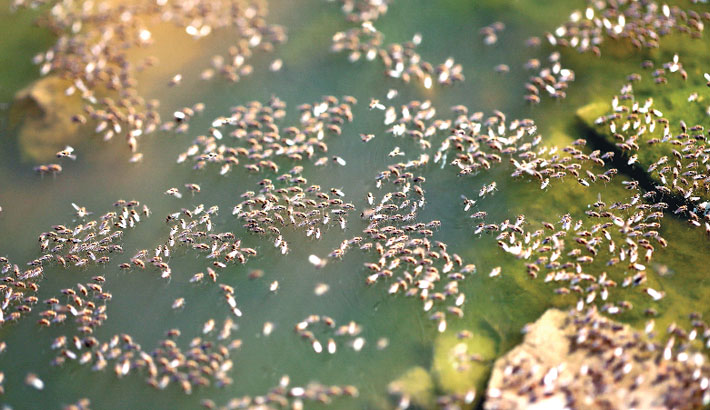 The fear of dengue fever has intensified among the city dwellers amid a sharp rise in mosquito population at the beginning of summer.

City dwellers are not getting any relief from mosquitoes in houses, offices, shops and public transports. There is not much respite from mosquito despite the use of nets, coils and aerosol sprays.

Despite the efforts of the authorities concerned in recent times, the residents of different parts of the city have been suffering from mosquito menace over the last two weeks.

From the beginning of February, the winter has started to fade. The mosquito population is also increasing with the rise in temperature.

Mosquito menace usually intensifies before dusk. But now the situation is the same in the morning and evening, many city dwellers said.

Dhaka South City Corporation (DSCC) Mayor Sheikh Fazle Noor Taposh on Wednesday said wrong suggestions by experts and strategy of the city corporation led to a rise in mosquito problem in the capital.

“Our experts suggested continuing the drive against Aedes mosquito until December and we acted accordingly. But in December the menace of Culex increased,” he added.

The city dwellers fear an outbreak of dengue and Chikungunya due the sharp rise in the mosquito population.

Although the city corporation has been implementing various activities to control mosquitoes but the city residents said the mosquito control activities are largely inadequate and ineffective.

At least 164 people died of dengue in the country in 2019. A total of 101,354 people were infected with dengue in 2019, according to the latest figure reported by the Directorate General of Health Services (DGHS) under the Ministry of Health.

According to a survey conducted by Kabirul Bashar, professor of zoology at Jahangirnagar University, Culex mosquito density in the capital is four times higher this year than in 2020.

He said they had monitored mosquito density six neighbourhoods of the capital — Jatrabari, Shakharibazar, Mohammadpur, Paribagh, Khilgaon and Uttara — to monitor mosquito situation throughout 12 months of the year.

“Very alarmingly, we found 50-60 mosquito larvae per deep — which is four times higher than 15 larvae that we had found per deep at the same time last year,” he added.

He said that mosquito density was increasing gradually from December when they found 35-40 larvae per-deep and 45-50 in January.

Junaid Murshed, a resident of Mirpur 11, said: “There is no relief from mosquito either in the day or night. Many people have to put up mosquito nets to sleep during the day. As the evening goes, mosquito menace increases many times.”

Lutfun Nahar, a resident of Uttara area, said when mosquito repellent is sprayed on the fogger machine, the mosquitoes enter the house from outside.

Ariful Hoque of Narinda area of old town said there is no need to blow smoke to kill mosquitoes. There is no benefit in blowing these smokes. Mosquitoes can be controlled if the city’s roads, drains and sewers are cleaned regularly.

DSCC Mayor Sheikh Fazle Noor Taposh said that “Since there was an outbreak of dengue, it was wrong to continue the activity till December, the strategy was wrong. With the onset of winter in our country, effective action should have been taken against Culex mosquitoes.”

“We are hopeful that the Culex mosquito will come under control in the next two weeks,” he added.

Local Government and Rural Development (LGRD) Minister Md Tajul Islam on Wednesday said “Now Anopheles and Culex mosquitoes have grown a bit. These mosquitoes are not very dangerous. But there is no reason to panic. We are working together address this problem.”

He said “If we can keep drains and water bodies clean and raise public awareness, we can get rid of the problem soon.”

Brig Gen Md Jubaidur Rahman, Chief Health Officer of the DNCC, told the Daily Sun: “There are many box culverts and covered drains where we cannot spray mosquito repellents. This is a major challenge for us.”

“But this time we have planned to use drone for spraying mosquito repellent where we can’t reach normally,” he added.

“Under-construction buildings are also a challenge for us as construction sites is a prime location for mosquito breeding,” he added.