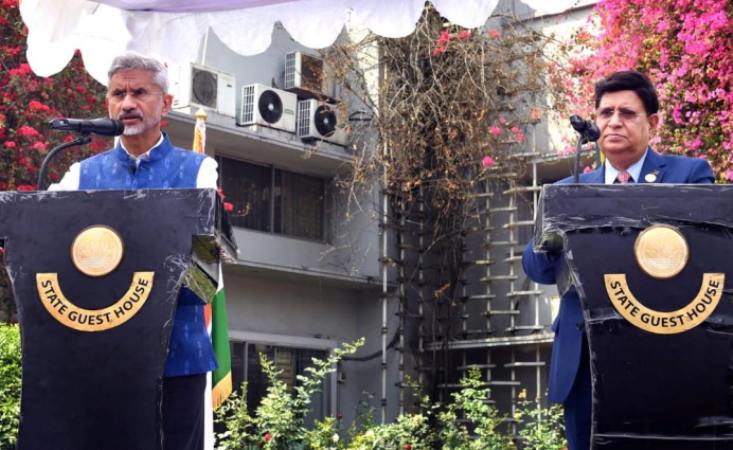 Bangladesh and India on Thursday discussed ways to take forward the relations as the two countries are set to celebrate the 50 years of Bangladesh independence together this month.

The two sides discussed a number of issues including border killings, the sharing of the Teesta waters, celebrate of the 50th anniversary of independence and 50 years of Bangladesh-India diplomatic relations.

After the bilateral meeting, the two foreign ministers of the neighbouring countries attended a joint press briefing.

In the briefing Dr Momen said, “We discussed a wide range of ongoing bilateral issues as well as bilateral interests that we can take forward in the days ahead. We focused on possible ways to materialize our commitments and how to prioritize and accommodate each other’s priorities in a mutually beneficial manner. Covid cooperation, connectivity, trade, water, security, border and lines of credit are some of the areas we discussed.

Mentioning that the preparations for the visit of Indian Prime Minister Modi to Bangladesh at the end of this month has been a key element of discussions, Momen said that they are very pleased that the Indian premier will join us for the Mujib Borsho celebrations as well as the Golden Jubilee of Bangladesh’s independence and 50 years of Bangladesh-India diplomatic relations.

“This is a landmark year for our two countries. We discussed some of the important activities that we plan to undertake jointly to celebrate these historic occasions,” he said.

The foreign minister said that Bangabandhu-Bapu Digital Exhibition will be inaugurated in Dhaka soon which will ultimately promote the ideals of the two great leaders, particularly among the youth population of the two countries.

“We are committed to continue our work together to take our bilateral relations to newer heights under the leadership of our two H Prime Ministers. We thankfully acknowledge the collaborative initiative of the two countries in implementing the vaccination program against the ongoing pandemic. As you all are aware, Bangladesh has purchased the COVID vaccine from Serum Institute of India and the Government of Prime Minister Sheikh Hasina is implementing the nationwide vaccination program free of cost,” he added.

While speaking in the briefing, Indian External Affairs Minister Dr S Jaishankar said that he is delighted to visit Bangladesh after a gap of nearly one-and-ahalf years.

Mentioning that Indian Prime Minister’s upcoming visit in Bangladesh will be a very memorable; Jaishankar said this is the first travel of Modi outside India since the Coronavirus pandemic as well as his second as PM to Bangladesh.

“We know that this is a very special year, when both countries mark the Mujib Barsho, 50 years of Bangladesh‘s Liberation and 50 years of our bilateral relations. This truly highlights the importance we attach to these three anniversaries, as well as the enormous regard we have for Prime Minister Sheikh Hasina and Bangladesh. Our relations transcend orthodox partnerships, and I believe our bonding is central to the realization of the dream of a peaceful, prosperous and progressive South Asia. It is in pursuit of this vision that both sides have made remarkable progress in this relationship, especially since  Prime Minister Narendra Modi‘s assumption of office in May 2014.

He said that the significance of his countries ties with Bangladesh lies in its centrality for their ’Neighbourhood First' and its growing relevance for’Act East’ Policy.

“We see Bangladesh as a key neighbour and a valued partner not only in South Asia but also in the broader Indo-Pacific region. Every outcome and achievement in our relationship resonates through the region. It is no secret that we cite it to others as an example for emulation. This is why we are working to expand our partnership in all dimensions, ranging from security, trade, transport and connectivity, culture, people to people ties, to energy, joint development of our shared resources and defence ties,” he added.

The Indian FM said that the comfort levels of both the countries are so high now that they have shown that there is no issue that we cannot discuss and resolve through amicable dialogue.

“It is a matter of satisfaction that despite the Covid pandemic, our interactions and consultations continued unabated. We have done Virtual Summit in December, Joint Consultative Commission in September, meetings of Foreign Secretaries, Power Secretaries and Home Secretaries, Police Chiefs, BSF- BGB and defence visits. Our Commerce, Water Resoruces and Shipping Secretaries are to meet soon. This itself shows the commitment of both sides,” he said.

While talking about Covid-19 vaccine, he said even the pandemic has provided an opportunity to reaffirm friendship. Bangladesh is the largest recipient of Made in India vaccines. Also among the friendship the largest gift of vaccines (2 million) is also appropriately to this country.

“Our recent activities go beyond consultations and gestures, however important they may be. We have made practical progress on the ground. Conducting trial run of container cargo through Chattogram Port to Agartala, adding two new Protocol routes to inland waterways connecting Tripura to your national waterways, handing over 10 BG locomotives , commencing movement of container and parcel trains and forming a JV in the energy sector are some recent examples,” he said.

Jaishankar also express his admiration and pride, as closest neighbour and friend, at Bangladesh‘s expected graduation from LDC status: it is a tribute to your miraculous socio-economic progress, and the statesmanship of Prime Minister Sheikh Hasina.

Both the countries highlighted their shared objective with an approach “no crime, no death” to end killing along the border, noting that every death is regrettable.

“Our shared objective should be no crime, no death (along the border). I’m sure if we can get it right - no crime no death - we can together address this problem effectively,” Indian External Affairs Minister Dr S Jaishankar told reporters at state guesthouse Padma.

On the water sharing issue, the Indian Minister said all know the position of India and that position has not changed.

The Indian minister arrived by a special aircraft in the morning. Foreign Minister Dr Momen welcomed him at Bangabandhu Air Base.

Jaishankar is visiting Dhaka at the invitation of Bangladesh Foreign Minister Dr AK Abdul Momen, aiming to deepen the ties between the two countries.

During the visit, the External Affairs Minister will also meet Prime Minister Sheikh Hasina in the afternoon. The visit follows on the PM-level Virtual Summit held between two countries on December 17, 2020.

Modi's planned visit to Bangladesh on March 26-27 will be his first trip abroad in more than a year, mainly because of the Covid-19 pandemic.

Bangladesh is set to celebrate the 50th anniversary of independence and 50 years of Bangladesh-India diplomatic relations this year.