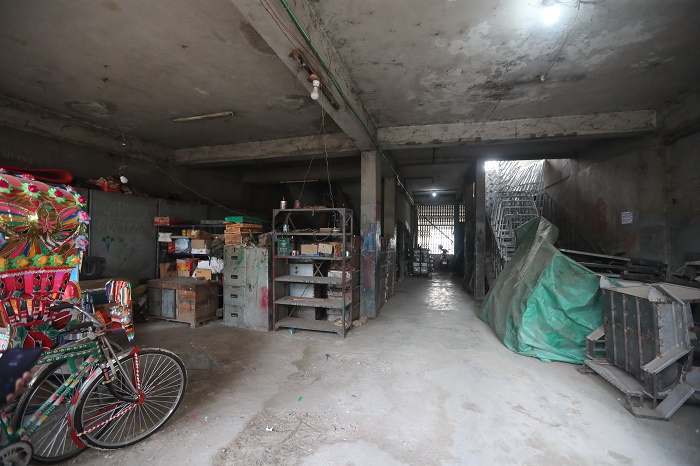 Illegal makeshift shops, dustbins and workshops of vehicles have been set up in and around Birshrestha Shaheed Sipahi Mohammad Kamal Stadium at Kamalapur in the capital, creating unhealthy atmosphere in the football playground area.

The stadium gates have turned into parking places for transport, which hampers its normal activities. These are happening under the very nose of the stadium authorities.

The National Sports Council (NSC), owner of the stadium, has made it unprotected as they have been renovating the playground for a long time.

The long-term development project has also made the stadium risky and filthy, but both the NSC and the stadium authorities are silent.

During a visit on Tuesday, this correspondent found a good number of illegal makeshift shops, tea-stalls and scrap shops have been set up in and around the stadium.

Apart from this, many buses and pickup vans were also seen parked just inside and in front of the stadium.

Other gates of the playground were found blocked by construction materials.

Only two of those gates are being used for entering or exiting the stadium.

An owner of an auto-rickshaw shop named Dhaka Dolphin Brand said they have been using these gates as their workshops without paying any rents.

Kazi Polash, manager of the stadium shop owners association, said owners of the shops use these gates as their workstations temporarily.

“There are 217 shops on the stadium premises. Some shop owners are using the entry gates as their workshops. Whenever we get notice from the authorities concerned, we evict the shopkeepers,” he added.

“Most of the shop owners do not pay any extra rent for using these gates.”

“The authorities are now renovating the stadium, leaving the owners out of their workshops. Hopefully, these issues will be solved after the renovation,” the manager also said.

A family was also found living in the western part of the stadium just opposite to its gymnasium.

A gym employee said the part of the gym complex is used for a long time as a government quarter where the driver of the NSC secretary is now living with his family.

The gym was found worn-out with its broken equipment. About the gym, the employee further said football players hardly use it.

When contacted, administrator of the stadium Jahangir Alam told the Daily Sun, “The western part of the stadium building is allotted to the government employees.”

“The NSC is renovating the entire stadium. As part of the development work, they are reconstructing the stadium gates, office rooms and toilets, so the stadium gets filthy and most of its gates are blocked by construction materials.

“I don't know when they will finish it. Shop owners sometimes use these gates as their temporary workshops, but we drive them away whenever we need to use those gates.”

They do not pay any rents for it. Some poor people have set up some tea stalls inside the boundary of the wall for livelihood, he said, adding that whenever the stadium will be fully renovated, we will drive them out.

NSC marked the Kamalapur stadium on their website as one of the country’s international football stadiums. Bangladesh Football Federation has been hosting domestic and international football competitions here for a long time. But the present condition of the ground is unsafe and inappropriate. Besides, there is also lack of security there.

NSC secretary Masood Karim said they are not aware of such complaints.

“We have no clear idea about it and have not got any complaints about these problems. But as far as I know, no one can stay in the stadium with family. I don't know about any government quarter there. The stadium authorities may temporarily permit government employees to stay there.”

“We are not sure about the entry gate blockade. The shop owners are NSC renters, they pay rents. We will drive them away if they block the gates permanently.”

“We started developing work before the Covid-19 outbreak. We have resumed it after the lockdown. Our target is to finish the work as soon as possible. The stadium gets filthy and untidy due to the development work. We have to ignore it for the greater interests," he added.