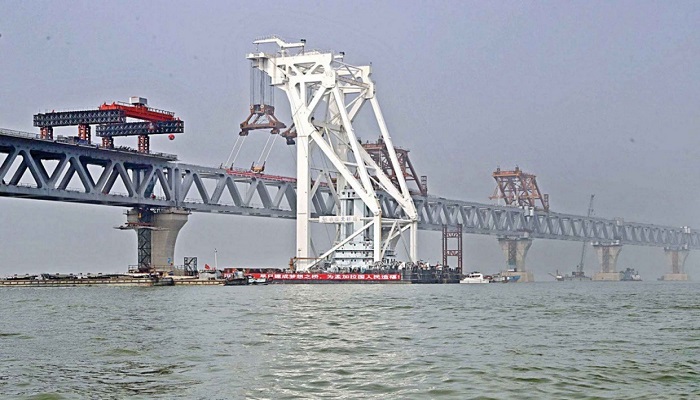 Finishing the Padma Bridge construction in time will require working round the clock in more than one shifts and in line with a time-bound action plan, suggests the Planning Commission.

In an inspection report, the Commission said the project has no technical problem now and the work should be advanced by working 24 hours with engaging the highest number of workforce.

Planning Commission’s Implementation monitoring and evaluation division (IMED) made the advice after it found a lack of workforce in the important project after visiting the project physically recently, sources said.

“The country’s image and economic development are tied to this very important project. But an inspection could not find an adequate workforce for implementing such a project in time,” the report said.

“IMED has made the suggestions so that the project is complete on time according to the expectation of the government as well as people,” IMED Secretary Pradip Ranjan Chakrabarty said.

IMED said the bridge’s construction work advances as far as possible before the upcoming rainy season as the work might be hampered in the season because of strong current in the river.

For more work progress and timely implementation of the scheme, IMED stressed intensifying the implementing ministry’s monitoring along with revamping other concerned committees’ activities.

It also asked the concerned authorities to inform it about what steps have been taken based on its recommendations.

The main challenge of the bridge construction was over on December 10 last year when all the 41st spans were installed successfully. Now the installation of the roadway and railway slabs is underway.

The bridge will be opened to traffic after the slabs are installed, asphalt pavement is done and necessary utility services are installed.

Padma Bridge was supposed to be open by June this year, but natural problems and the Covid-19 pandemic delayed the work.

Now, the bridges division, the implementing agency, seeks a time extension of up to June 2022 for constructing the main bridge and until June 2023 for completing the defect liability period, commission sources said.

However, the bridges division seeks to open the bridge to the traffic by June next without making any change to the project cost of Tk 301.93 billion. The construction work started on December 07 in 2014.

Padma Bridge’s work is now going on to finish by June 2022 as corona has abruptly slowed down the project work, bridge division officials informed.

So far, the project has seen 84 per cent overall progress with main bridge construction work advancing 92 per cent and river training work lagging with 78 per cent progress, official data suggest.

While giving suggestions, IMED mentioned 76.50 per cent overall progress with 83 per cent main bridge work and 62 per cent river training work until December 2020.

Meanwhile, Planning Commission is going to curtail the project cost by Tk 29.01 billion in the revised ADP of the current fiscal year from Tk 50 billion original allocations as the allocated money is not likely to be spent this year.