Promise of a Bright Future 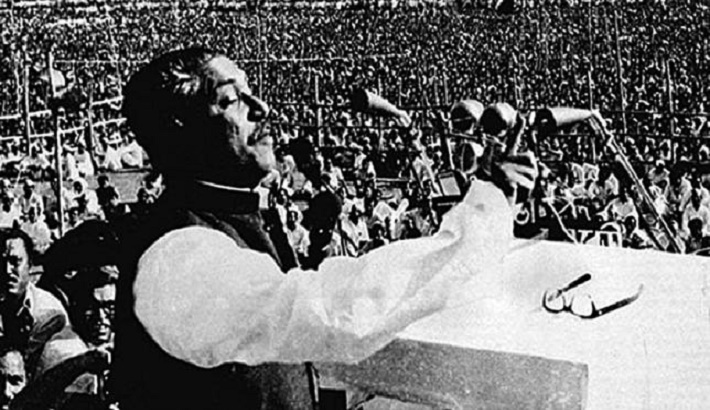 Awami League led by Bangabandhu Sheikh Mujibur Rahman obtained a clear majority in Pakistan National Assembly. East Pakistan was then taking preparation to establish a new Bangladesh. General Agha Muhammad Yahya Khan intentionally suspended the National Assembly session so that Bangabandhu Sheikh Mujibur Rahman cannot assume power. Today is the day for pondering the attempt of annihilating democracy. We remember the hoisting of Bangladesh flag by Dhaka University students on March 2. ‘Joy Bangla’ slogan was first heard at the historic speech of Sheikh Mujib at the Race Course ground. He proclaimed: "This time the struggle is for our freedom. This time the struggle is for our independence."

I was reading the historic novel ‘A Golden Age’ written by Tahmima Anam. Tahmima Anam is born in Bangladesh. The book was written based on the background of Bangladesh Liberation War. The tale of March 1 was narrated in a fascinating manner. The novel that was awarded the prize for Best First Book in the Commonwealth Writers' Prize 2008 was first published on January 8, 2007. Today, after so many years of the Liberation War, readers get amazed by reading the story of freedom fight. I am an Indian. In 1971, I was then a boy. However, I read books written by the freedom fighters of Bangladesh as well as those of journalists and historians. Even from various Indian journalists, I came to know about the way ‘Operation Searchlight’ was conducted. March 26 heralded a new era of Bangladesh by overcoming all tyrannies. Now, ‘Mujib Borsho’ (Mujib Year) is going on. Life and works of Bangabandhu are being studied in Bangladesh and India. Marking ‘Mujib Borsho,’ Indian Prime Minister Narendra Modi is expected to visit Dhaka. At the same time, a programme commemorating the birth of Bangladesh is underway. In this situation, both the countries feel the need of formulating a future guideline.

A few days ago, I was attending a discussion on Language Day and Bangladesh Language Movement under the auspices of Sampreeti Bangladesh. The next day was the International Mother Language Day. It became evident from the discussion that was moderated by Pijus Bandyopadhyay about the relationship of mother language with independence and formation of a new state. While following the discussion I was thinking that most probably there is no other country in the world, but Bangladesh where national identity comes out of Language Movement. May be, it is the reason why Pakistan and many other states became fundamentalist ones. But, in Bangladesh it was not possible to turn it into a fundamentalist state despite attempts made in this regard. Because of the reason, Bangabandu had to sacrifice his life. Again, the identity of language became prominent than that of religious identity.

It is widely talked about that there exists a clash of identity among the people of Bangladesh. Are the people of Bangladesh firstly Muslims rather than Bengalees? Or, are they Bengalees before their Muslim identity? Despite the clash, Sheikh Hasina, the worthwhile daughter of Bangabandhu, strives to move forward maintaining a balanced coordination between the two identities. This is the reason behind Bangladesh’s economic achievements. Despite its smallness in area, the country’s GDP growth has attracted the attention of entire world. The World Bank and other international organisations are delivering good reports on Bangladesh. Even noted economist Amartya Sen has highly praised the economic growth of Bangladesh. Another Nobel laureate Abhijit Banerjee has cited time and again the instance of Bangladesh in alleviating poverty. So, I believe the efforts of Bangabandhu Sheikh Mujibur Rahman did not go in vain.

Had Bangabandhu been alive then what would have been the status of Bangladesh or, what would have been the nature of Indo-Bangladesh ties--I am less interested in such hypothetical discussion. This sort of discussion is widespread throughout the globe. Lots of books have also been written on this topic. What would have been the face of the world if the Second World War did not happen? Lots of people are engaged in such academic exercises sitting on easy chairs. But, it is much more important to concentrate attention on the global scenario.  Democracy is being endangered worldwide. Military coups are happening everywhere. Myanmar has come under military rule. Sri Lanka is in political turmoil while there is unrest in Nepal. But, Bangladesh is not only moving forward, but it got involved in spreading Bangla language all around through socio-political and cultural platforms. Elaborate programmes have also been chalked out in this regard.

Bangladesh missions abroad have been activated for the purpose all over the globe. Bangladesh Ambassador to the European Union (EU) Mahbub Hasan Saleh graced the Bangladesh Sampritee dialogue by his presence. Once, he had acted as the Deputy High Commissioner of Bangladesh in New Delhi.  He said: “In diplomacy, there is a word like ‘Soft Power’. Culture is that ‘Soft Power’. Bangla language can be expanded not only through literature, but also through cinema and various mass media. Lots of Bangladeshi people live worldwide. A greater number of Bengalee-speaking people live across the globe. If a common platform can be floated bringing all Bengalees together then it would help strengthen the Indo-Bangladesh ties alongside bringing economic prosperity for both the countries. It will be possible to formulate a roadmap for the sub-continent’s economic advancement. That would be a major achievement.  The Bangladesh Liberation War of 1971 would remain as a source of inspiration.

For Bangladesh, March is the month of struggle for freedom. March 1, 1971 was a Monday. And the day is a terrible memory. Although Awami League led by Bangabandhu Sheikh Mujibur Rahman came out victorious in the 1970 elections, the party was barred from taking power. General Yahya Khan postponed the National Assembly session creating a tense situation all over. Not only on Dhaka University campus, tension prevailed everywhere. On March 9, demonstrators did not allow the anchorage of arriving ships at Chittagong port. On March 10, Bangalees staged a protest demonstration in front of the United Nations office. On the fateful night of March 25, Pakistan army launched the world’s worst-ever genocide through ‘Operation Searchlight’. Just after launching of its operation, Bangabandhu was arrested. Earlier, he had declared independence of Bangladesh. Afterwards, it is a long history.

Now, in this month of March, let us take a promise. It is a promise of a bright future for the two countries-India and Bangladesh.