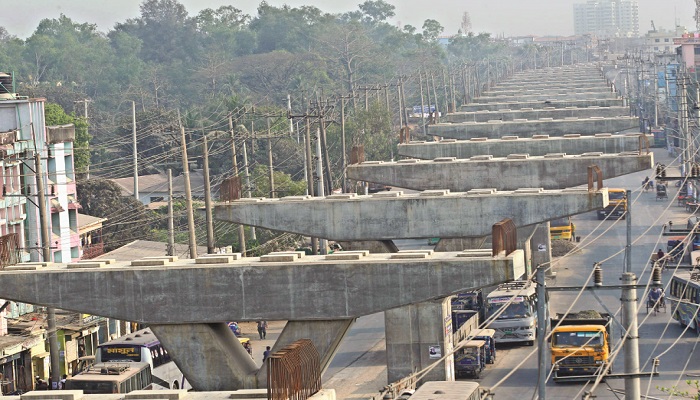 The work on the elevated expressway under construction in Chattogram will get pace soon as complexities over the design in the port area have finally been resolved.

The mega project is being implemented with government funds to facilitate smooth traffic in the port city.

As 45 per cent work of the project has already been completed, officials concerned hope that the expressway will be open to traffic by June 2023.

A good number of pillars and girders have already been set up from Patenga to Saltgola Crossing.

The officials said the entire project areas have been divided into four parts.

It compelled the implementing agency CDA to carry out the work mostly in 5.50 kilometre area stretching from Patenga to Cement Crossing.

Work on the remaining areas couldn’t be carried out at the expected level for a long time, sources said.

The CPA raised an objection that if the expressway is constructed through the main thoroughfares, security of the roadside structures, including the jetties, might be hampered.

After several meetings among the stakeholders, it was decided to build the expressway through outside the thoroughfare earlier.

The decision also resulted in complexities over land acquisition and compensation to the land owners.

But, a decision was taken in a fruitful meeting on Monday last to construct the expressway through the main thoroughfare from Barik Building intersection to Customs intersection on some conditions.

The conditions include keeping space for movement of vehicles in four lanes during the construction work and six lanes after completion of the work, said sources in the CPA.

The decision will save a cost of Tk 400 crore in the project, they said.

CDA Executive Engineer and Project Director (PD) Md Mahfuzur Rahman said with the new decision, most of the complexities centring the project have been resolved.

“Some 10 to 12 feet areas will be required to acquisition for fulfiling the conditions set by the CPA in the recent meeting,” Mahfuzur said.

“Earlier, the project deadline was extended until June 2022 from June 2021 and one more year will be needed to get the entire work done. We’re hopeful of completing the project work by June 2023,” he added.

The Executive Committee of the National Economic Council (ECNEC) approved the mega project, first of its kind in Chattogram, in July 2017.

The project involving Tk 3,250.84 crore is being implemented with the government’s fund.

The CDA initiated the project aiming at developing smooth communications between the Chattogram city and south Chattogram districts and upazilas, reducing distance and expense for commuters in the city and easing movement to and from the Chattogram Port and Chattogram Shah Amanat International Airport.

The CDA, earlier, constructed two flyovers connecting the Bahoddarhat and Lalkhan Bazar areas in the city. After implementation of the expressway, the two ends of the city will be connected through the flyovers and the elevated expressway, said the sources concerned.

The 16.5km elevated expressway will be a four-lane one with total width of 16.5 metres. It will have 24 ramps at nine points from Lalkhan Bazar to the airport. With the ramps, the total length of the expressway will stand at 28.5km.

The CDA opened the 6.8km ‘Akhtaruzzaman Flyover’ from Muradpur to Lalkhan Bazar to traffic on June 16 in 2017.

A ramp in front of Nasirabad Boy’s School and the 70-feet high loop connecting the Baby Super Market on Bayezid Bostami Road and the GEC intersection reduced traffic congestions significantly in busy Sholoshahar Gate No.2 area.