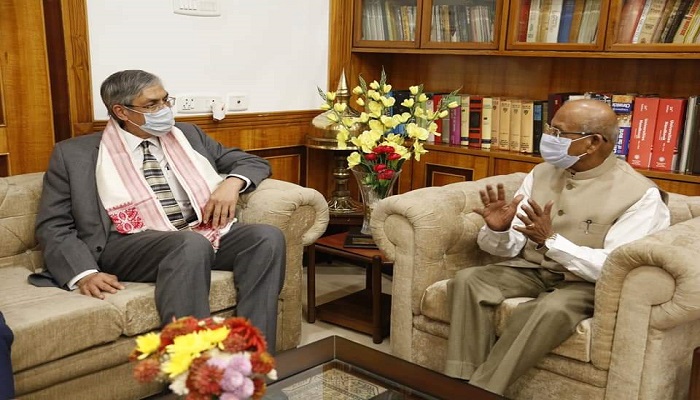 As Bangladesh is graduating to a developing nation, BJP led Assam Government pitches for bigger trade cooperation with Dhaka in the coming days.

Another BJP ally state government of Meghalaya has expressed the same opinion as Bangladesh High Commissioner to India Muhammad Imran met heads of the state governments on Tuesday and Wednesday respectively.

Meanwhile, a new cross-border rail link between Dhaka and Siliguri is expected to be opened by Prime Minister Narendra Modi and Prime Minister Sheikh Hasina during the former’s Dhaka visit on March 26.

Passengers from Dhaka can travel upto northeastern states of India easily after the train service begins.

Deputy Chief Minister of Indian state of Meghalaya Prestone Tynsong has highly appreciated Bangladesh’s leadership for achieving tremendous progress in various sectors and laid emphasis on further increase in bilateral trade for the betterment of the two.

In this context, he proposed for setting up a new ‘Border Hat’ and land tariff station along the Bangladesh-Meghalaya international border line aimed at further expansion of bilateral trade.

He made the proposal when Muhammad Imran paid a courtesy call on him, according to a press release received from Shillong issued by Bangladesh High Commission in New Delhi.

Both the state governments are in discussion on a draft agreement, sources said, adding that commerce secretaries of both countries will soon meet in Dhaka to finalise the draft on free trade deal.

Assam Governor has suggested that commodities presently allowed for exports are restricted to a specific list, namely positive list.

He was of the opinion that ambit of this positive list should be expanded to enhance the growth of trade.

"Both the countries should be able to trade the items freely thereby enhancing the exports and imports as per capability and requirement," he said.

The Governor anticipated that recent agreements with Bangladesh for allowing use of ports by the vessels from northeast would create an atmosphere to enhance trade for mutual benefit.

Formal agreement on this is likely to be signed during Modi's visit to Bangladesh, sources said.

High Commissioner assured the Governor of taking the issues to Bangladesh government policy level to expedite the proceedings.

Both of them are expecting a path-breaking agreement to be signed during PM Modi' visit to Dhaka for mutual benefit.