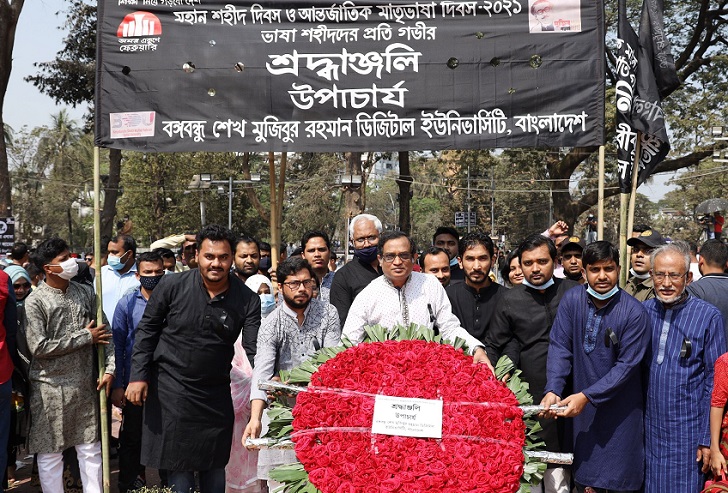 He paid the homage by placing wreaths at the Central Shaheed Minar on Sunday morning as a mark of profound respect to the memories of the Martyers, said a press release.

After placing the wreath, VC Munaz Ahmed Noor said, “Father of the Nation Bangabandhu Sheikh Mujibur Rahman was the motive force of all achievements by the Bengalis. Bangabandhu led the nation in every movement of Bengalis including Language Movement. The leader like Bangabandhu is very rare all over the world. The Bengalis have become successful by dint of cunning leadership of Bangabandhu from Language Movement to the Liberation War of 1971.”

“Seeds of Bengali nationalism were sown during Language Movement. It will be inscribed with golden letters in the history of the world,” he added.

He also called everyone for paying respect to the mother tongues and native cultures of all ethnic groups on the occasion of International Mother Language Day.

Among others, Registrar Md. Ashraf Uddin, Senior System Analyst Muhammad Shahinul Kabir, Assistant Professor Mohammad Ashrafuzzaman and other teachers, officers and employees of the university were also present on the occasion.