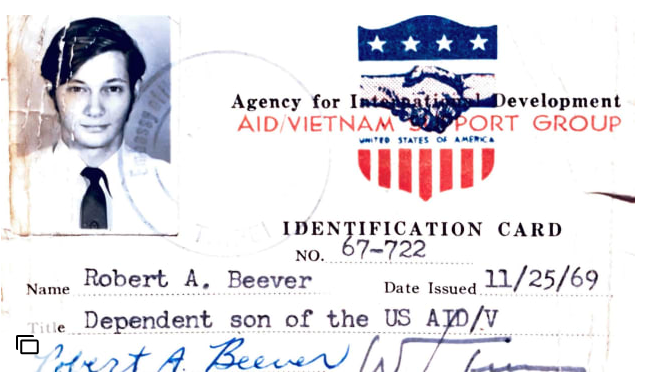 Robbinroger Beever was 15 years old and walking home along a beach in Liberia, West Africa.
The year was 1967. Beever's family lived near Monrovia, where his diplomat father worked at the US Embassy.

It was high tide and the sea had washed up seaweed and planks of wood and strewn them across the beach. Amid the debris, Beever spotted something glistening in the late afternoon sun.

"I'm the type of person who's very curious about what the ocean can bring to people who have their eyes open," he tells CNN Travel.

Beever got closer. It was a whiskey bottle. Picking it up, he could see something coiled inside. He tried to open the bottle, unsuccessfully.

It's probably just some kind of label, Beever thought, but decided to take it home anyway.
Back home, he showed the discovery to his mother. They put it on the dining room table and after a bit of effort they managed to prise the cap open.

The something inside wasn't a label. It was a letter -- a message in a bottle.
Beever uncoiled the sheet of paper, and started to read:

"I threw this bottle off a merchant marine ship passing over the Equator near central Africa," it read. "My name is Gösta Mårtensson, I am Swedish merchant marine."

The letter was dated from 1965. Mårtensson had included a return address for his home in in Gothenburg, Sweden.

Beever enthusiastically wrote back, introducing himself: an American teenager, one of two sons of a British-American father and an Austro-Hungarian-Dalmation mother from Trieste, Italy. He told Mårtensson the story of how he'd stumbled across the bottle.

Mårtensson was thrilled his letter had found its way to a recipient, but he was in his late 20s.
I'm not the ideal pen pal for a 15-year-old, he thought.

But he had an idea: he'd introduce this young letter writer to his wife's sister, Saija Kuparinen.
Kuparinen, 14, lived in Finland. She'd had no idea her brother-in-law had thrown a bottle off a ship near the Equator, but upon hearing the story she was eager to write to the boy in Liberia.

Kuparinen wasn't confident writing in English, so she composed a message in German, writing about her school, friends, family and life in Finland.

She hoped she'd get a response, but her letter traveling across the world felt like a longshot.
But it wasn't. Beever got her letter and was delighted. He loved the idea of communicating with a girl in Finland.

He scrawled a response, and a connection was formed.

Five decades later, the pair are still in touch, not only pen pals but close friends who've watched each other grow up from afar.

Today, Kuparinen lives with her family in Finland, while Beever, who's spent time in countries across the globe, now lives with his wife and sons in Germany.

"Our friendship never stopped, even when I had my life with my daughter and husband," Kuparinen tells CNN Travel.

"We have been corresponding for almost 55 years -- from being giggly teenagers to older responsible adults," says Beever.

"I felt really, really connected to her."
Growing up, Beever's family were never in one place for long.
Following the three-year stint in Liberia, the family moved back to Washington, DC for a year. For a while, Beever's letters to Kuparinen came with a US post stamp.

He wrote in English, and, at first, she always wrote back in German.
Then his father started working for the US Agency for International Development and was dispatched to Vietnam to work as an advisor during the war. His wife and sons based themselves in Taipei to remain a safe distance from the conflict.

Beever wrote to Kuparinen about his growing love of Taiwan, especially the folk art tradition.
He also wrote candidly about his worries for the future.

"We were growing up. We don't know what direction our lives will go in. The Vietnam War was raging," he says.

"I always felt I could write to her. I had never met her, but I felt there was a kind of spiritual connection between us."

Beever began traveling back and forth to Vietnam to visit his father, and he wrote to Kuparinen about what he saw.

"Some of the experiences were beautiful," he says. "Others were horrendous, especially when I saw American soldiers, who were my age, fighting a war against people they didn't understand, in the country they had very little information about."

At 18, Beever had to register for the draft. Some of his American friends served, but his number was never called up. He was relieved.

Among these more serious musings, Beever and Kuparinen had also bonded over a love of rock music.
They were both fans of The Rolling Stones and The Mamas & the Papas. The pen pals started to speak on the phone on occasion. One of them would play a record through the receiver, and they'd dance together -- separated by oceans and thousands of miles.

Already, Kuparinen had become a constant in Beever's life. He'd always made friends easily but moving from place to place meant retaining those relationships was hard.

And for Kuparinen, receiving dispatches from countries she'd never been to was fascinating.
"Of course, in my youth others had pen pals too, but not the kind [like] Robbie, who was moving from one country to another," she says.

Kuparinen always tried to make her responses creative and interesting. She used to make envelopes from pages she'd torn from fashion and nature magazines.

Receiving these, and seeing the care and attention behind them, was a thrill for Beever.

"Then I knew she really liked me, even though we had never met," he says.